To finish last season, Martin led unranked Big Rapids to its first MHSAA Semifinals and within a basket of playing for the Class B championship. He began his senior campaign with another, more individual highlight; the 6-foot-4 guard scored his 1,000th point in a 65-50 win over Grant on Friday to earn the Michigan National Guard “Performance of the Week.” Martin, a four-year starter, finished with 31 points and 12 rebounds against Grant and added 24 points and 10 rebounds in Tuesday’s 63-43 win over Lakeview.

Martin also was the team’s leading scorer last season, averaging 19.5 points per game along with 8.8 rebounds before scoring a team-high 22 in a 61-60 Class B Semifinal loss to Stevensville Lakeshore. After, he was named Central State Activities Association Gold Player of the Year for the second time and made the Basketball Coaches Association of Michigan all-state team. This winter, Martin is teaming with senior Christian Hector, junior Braeden Childress and others including sophomore brother and starting point guard Dorian Martin with hopes of returning to the championship mix. Demetri Martin entered this season needing 21 points to reach 1,000 for his career, and nearly pulled off the feat in the first quarter of that first game. He worked this summer on adding a longer pull-up jumper, and he went over 1,000 swishing a pull-up 3-pointer from NBA range.

Just as impressive over his four years of high school has been Martin’s climb academically. In his words, Martin entered high school with all Ds and was barely academically eligible to play basketball as a freshman, frequently skipping school before and after that season. But he’s now pulling As and Bs and plans to study for a career either in education or sports medicine. He'll surely play college basketball at some level – most of his interest has come from Division II schools but he's also had contact from one in Division I.

Coach Kent Ingles said: “He’s obviously the best player in (our) area, and the best player we’ve had in a while … and he’s following a couple pretty good kids into the mix. He’s a multi-position player; he’s actually pretty unselfish. He’d rather pass the ball than shoot it. He’s been with me four years, and we’ve won three conference championships and been to the Quarter(finals) two times. … I told him we’ll be a good team when our best player is our hardest worker, and he’s done that too. He is a real success story. He’s a neat kid. He’s bubbly, he’s fun to talk to, he’s kinda hyper and can’t sit still. But he’s grown up a lot as a young man and as a basketball player, and we’re happy to see the total development with him."

Performance Point: “Not many people can score 1,000 points, so for me to get that, it just means a lot to me,” Martin said, “that all the hard work I put in is starting to show. I thought about (the 1,000th point) for a couple of months once I found out how far (away) I was, and I was thinking I can get this in the first quarter if I actually try. I ended up with 17 (points in the first quarter), but I was just taking it slow. If I would’ve kept that scoring streak going, I probably could’ve gotten it in the first quarter.

Breslin dreams come true: “Half the state (last season) probably didn’t even know where Big Rapids is. We weren’t ranked. We’re not in the Grand Rapids area. So it’s, where is this team from? And then we show up, and everyone probably expected a blowout. (But) in the beginning of the season, before we even started practicing, I was talking to some of my old teammates and I said, ‘We’ll probably make it to Breslin this year, you know that?’ We did. We made it. We were a lot better than what we played. … Since this is my last year, I know what we have to do to get there again, and I want to try my best to get there.” 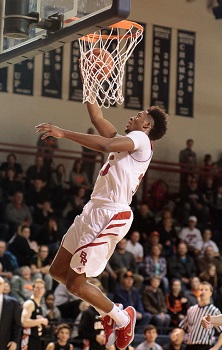 Preparing the future: “My freshman year, I was just a rebounder. I picked up the leadership stuff from (2014 graduates) Quinn Tyson, Jake Hayes, Austin Hayes; they passed me the torch, so sophomore year I would lead but not like last year when I was leading the team and obviously one of the go-to guys. (This season) I’m trying to tell (my teammates) what to do and what not to do, how the game should be played so they can score 1,000 points in their careers too, so they can lead other future Big Rapids teams. I don’t want to go out as just a scorer who didn’t really teach the kids anything.”

Football’s a hit: “I played football for the first time (this fall). It was pretty fun. I wasn’t the go-to player, so it was different. But blocking was probably the best – you get to slam people. Tryouts had already passed, but the night before two-a-days I had a dream, and I was like man, I’m going to go out and try out for football, and I knew coach wanted me to play. … I’m glad that I played, and I got physically stronger too.”

Continuing to make a difference: “I want to become a teacher … because my coach (assistant Blake) Thomas, when I came here and then I was struggling a little bit in classes, he’d invite me over and we’d study on this, and that brought my grades up a lot. To help someone out like that, and not even know them, I think that’s something some kids need and I want to do that. Sports medicine, I injure myself a lot, so if there is someone who has these problems like me, I would help them out.”

PHOTOS: (Top) Demetri Martin glides around a defender during last week’s win against Grant. (Middle) Martin drives to the hoop as Big Rapids went on to a 65-50 victory. (Photos courtesy of the Big Rapids athletic department.)