PETOSKEY — Dennis Starkey was the face of Petoskey basketball for 32 years.

Now the Northmen have turned to a new, but familiar face to lead them into the next era on the hardwood after Starkey announced his retirement following the 2017-18 boys basketball season.

John Flynn, who suited up for Petoskey from 1996-98 and is among the school’s all-time greats, has taken over for his former coach after spending the last two seasons as a varsity assistant on Starkey’s staff.

“It’s kind of been surreal,” said Flynn. “I guess I never really thought about being Petoskey’s next coach just because when you think of Petoskey basketball you think of Dennis Starkey as the varsity coach. It wouldn’t exist without him. It never really crossed my mind that he would ever step down. He’s been there for so long. That’s all I’ve ever really known.”

Starkey felt like it was time to step down after last season, however. Not because the Northmen weren’t having success. In fact, last season’s 19-3 record was the 14th consecutive season that Petoskey had finished above .500. Starkey, who had already retired from teaching three years ago, was simply ready to enjoy other aspects of life that had been on the backburner during a 36-year coaching run during which he won 553 games — with 515 of those coming at Petoskey — and earned spots in both the Basketball Coaches Association of Michigan and Michigan High School Coaches Association halls of fame. Starkey won 17 Districts and 14 conference championships while turning Petoskey into a model of consistent excellence on the basketball court.

Flynn was one of nine candidates who applied to replace Starkey. He was familiar with the program and seemed to be a natural fit, given the amount of time he had been a part of it. After going through the process with all the candidates, the school felt the same way.

“There were definitely some quality guys (who applied),” said Petoskey athletic director Dave Smith. “We were looking for someone who was going to be around for a while, and that was John.

“It’s nice to have one of Dennis’ former players. (John) certainly learned from one of the best.”

Starkey was pleased when Flynn was announced as his successor last spring and sees Flynn as having a bright future as a head coach.

“I thought it was a great choice,” said Starkey. “He’s a hard worker and he’s got a great personality. John’s always been a student of the game, and I think it’s been a real good fit. Nobody is going to outwork him, and that’s the No. 1 (trait), and he has good relationships with the kids. The combination of his work ethic and his ability to relate to the kids will make him special.”

Coaching basketball comes naturally to Flynn. His dad Joe was a longtime coach at Harbor Springs and had great success there. John Flynn started his high school career as a freshman at Harbor Springs but transferred to Petoskey as a sophomore and — along with backcourt mate Trevor Huffman — helped the Northmen win three straight Class B Regional titles, including getting to the MHSAA Semifinals twice. In 1997 Petoskey lost to Detroit Country Day, which went on to win its third straight Class B championship. In 1998 it was Marshall that ousted the Northmen. 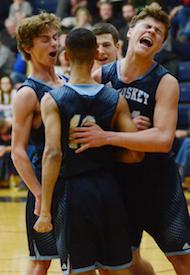 “John understands how important basketball is to this community,” said Smith. “He has quite the drive and passion for the sport. That’s just something I don’t think many coaches can match. It’s not just necessarily about winning (to him), but certainly he holds our guys very accountable for doing things the right way. There’s no letdown with any of that. He just demands that they’re going to work hard and do their best.”

Flynn is a new voice on the bench, and he’s added a few wrinkles to Petoskey’s look, but the Northmen still have the basic tenets that were established under Starkey and remain the backbone of the program.

“We’re going to focus on the fundamentals, hold guys accountable, talk on defense, just be tough-nosed — the Petoskey brand,” said Flynn. “I got that from Coach Starkey, and that’s never going to change. We’re going to give 100 percent. We’re not going to make excuses. We’re going to leave it on the floor, and if we lose some, we lose some. If we win some, we win some, but you can go home at night and go to sleep saying, ‘Hey, we laid it all on the line.’ I know Coach Starkey, that was true to him for more than 30 years and that doesn’t change.

“There might be some different stuff as far as Xs and Os that we do, but he and I both adapt with the talent we’re given each particular year. I’m just trying to give these kids a platform to give them the best chance to succeed. This year that style is a little bit different than what we’ve played in the past, but there’s still some of that core values and beliefs from a program perspective that’s never going to change.”

The results on the floor have so far been consistent amid the transition, too. Flynn’s squad started the season by winning four of the first five games, including a 57-52 win on the road over previously-unbeaten Alpena in the Northmen’s Big North Conference opener.

“The guys I have this year — they’re such good kids, and they work so hard,” said Flynn. “That right there keeps me fired up and motivated to do my best as a coach, because they’re receptive. Now they’re starting to see my method to my madness as far as what I’m saying works. They’re starting to see the fruits of their labor.”

Starkey has purposely tried to keep his distance to give his former player all the space he needs, even scheduling a trip to Florida to coincide with the start of the regular season. The two have spoken a number of times, however, as Flynn continues to glean information from his former coach and mentor.

“We have great conversations,” said Flynn. “It’s great to bounce ideas off of him. I hope he enjoys it as much as I do because he still has that coach mentality that’s been interwoven into his fabric for the last 36 years. I’m glad we’ve got such a great relationship. I respect him and his knowledge so much.”

Flynn may not have specifically set out to become Petoskey’s basketball coach, but the timing of the vacancy, his love for the game and the opportunity to carry on the rich Petoskey basketball tradition made for a perfect match.

“I just felt like there was a need and I had to fill that need because I know I could try to do as good of a job as Coach Starkey and carry on his legacy,” said Flynn. “This is the baton. Now it’s my turn to keep this going. Kind of like, ‘Coach, I got this.’”

PHOTOS: (Top) Petoskey boys basketball first-year head coach John Flynn directs his players during a practice this season. (Middle) The Northmen celebrate one of many encouraging moments early this winter. (Photos courtesy of the Petoskey News-Review.)