We run into plenty of great ideas during our travels around the state. And what better way to make our vast home feel a little bit smaller than to share them.

This was one of our favorites from this winter. Petoskey's Throwback night combined two things we often promote at the MHSAA -- an appreciation for our history and lots of fan involvement. 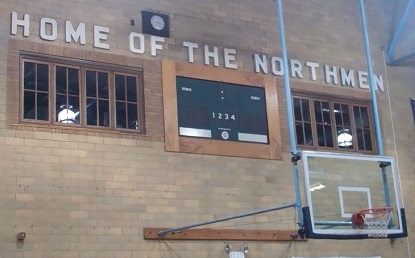 Each season, the Northmen pick a boys basketball to designate for a "throwback." Players wear some of the school's old uniforms from that era -- this season it was the 1950s -- and fans dress to match.

Petoskey also has the benefit of playing Throwback games in its old gymnasium at Central School, which was built in 1927 and now serves as an elementary school -- although sub-varsity teams also play in the gym regularly.

It's an awesome arena straight out of "Hoosiers" or any basketball nostalgia. Fans sit in wooden seats that line both sidelines and are raised up and away from the floor. There are two old-school scoreboards -- one on the wall and the more recent hanging from the rafters. 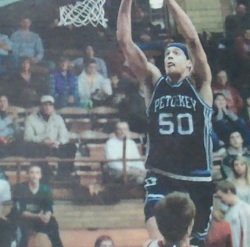 The building, which served as the high school's main gym until 2002, also was used regularly for Districts and Regionals for decades. It's easy to imagine the 1,500 seats filled and fans howling.

"No matter who we play, that's the best atmosphere for the game," Petoskey senior Nick Godfrey said of the throwback events.

PHOTOS: (Top) Wooden seats line both sidelines at Petoskey's Central School Gymnasium. (Middle) A sideline wall announces "Home of the Northmen" above an early scoreboard. (Middle below) The stands are mostly filled for the 2010 Throwback game as then-junior Cory Starkey, in head band, drives to the hoop. (Below) A photo from a game at Central Gymnasium during a much earlier era hangs in the classroom of Petoskey High teacher Matt Tamm.