EAST LANSING – At River Rouge, 14 MHSAA championship banners tell of one of the most storied programs in Michigan high school boys basketball history.

They don’t hang banners there for making the Semifinals or finishing runner-up.

That’s been on the minds of Panthers players all season after falling in the Semifinals the last two – and it was on their minds again as Friday’s Division 2 Semifinal against unbeaten Harper Woods Chandler Park went into overtime.

River Rouge saw a lead as large as 10 fade away during regulation, and then barely earned overtime on a last-second 3-pointer. But on the 20th anniversary of their last championship, the Panthers will get the opportunity to play for possibly the next after hanging on for a 72-66 victory at the Breslin Center.

“We need to win. I need to do whatever it takes to win the state championship. That’s what was going through my mind the whole time,” said River Rouge sophomore Legend Geeter of the game’s final stretch.

“I’ve been (to Breslin) once and lost in the Semifinals, and it was not a great feeling. In my mind, in order for this program to keep being great, we’ve got to win another state championship and put another banner up.”

Coach LaMonta Stone, who led the 1999 team, returned in November after two seasons away for his third tenure running the program and immediately told his players this season would be “state championship or bust” – but also that his expectation was that they would win title 15.

River Rouge has the most championships in the MHSAA’s 94-year history, but none during the 2000s, and the Panthers couldn’t bear the thought of another opportunity slipping away. 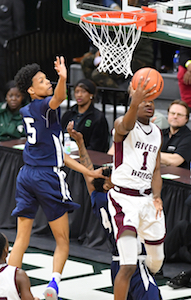 The double-digit lead – 33-23 just less than a minute into the second half – did slip away gradually over the third and fourth quarters. Senior Josh Diggs gave Chandler Park a 58-56 lead with a 3-pointer with 49 seconds to go in regulation, and two free throws by senior Andre Bradford pushed the advantage to three with 13 seconds left. But senior Nigel Colvin saved River Rouge’s championship hopes, taking a pass down the baseline on the ensuing possession, moving two steps to his right and draining a 3-pointer with three seconds left on the clock.

“Nigel when I came into this team was just a spot-up shooter,” Stone said. “But he’s the hardest-working kid on the team. Every day before practice, after practice, he’s working on his 1-2 dribble pull-up. He doesn’t want to be known as just a 3-point shooter.

“So when I saw that shot, and he had to get it off, I’m just thinking back to when he’s in the gym after practice, before practice, working on those type of shots where he has to take one or two dribbles and shoot the ball. Two or three months (ago), he couldn’t have made that play – because he was just a spot-up shooter.”

Colvin hit another 3-pointer to open the overtime scoring, and Chandler Park senior forward Tyland Tate answered to tie things back up. But a Geeter basket with 1:50 to play gave the Panthers the lead back for good, as they finished on a 7-3 run.

The loss was the first and only this season for Chandler Park (21-1), which won its first Regional title last week on the way to this first trip to the Semifinals.

“You saw the support we had. A lot of people came out,” Chandler Park coach James Scott said. “Small charter school, on the end of the east side, Harper Woods area. So I thought it was big to show that we have talent, we’ve got some players and it’s a program on the rise. From making this type of run, every year, moving forward.”

Bradford had 14 points and three steals, and senior guard Derrick Bryant Jr. had team highs of 15 points and six assists for Chandler Park.

Colvin finished with 20 points to lead River Rouge, making 8-of-10 shots from the floor including 4-of-6 from 3-point range. Geeter added 17 points and six rebounds and senior Donavan Freeman scored 12. Senior Bralin Toney had seven assists.

PHOTOS: (Top) River Rouge players embrace senior Nigel Colvin after his game-tying 3-pointer during the final seconds of regulation Friday. (Middle) Donavan Freeman (1) gets a shot up just out of the reach of Chandler Park’s Tyland Tate.