EAST LANSING – First one and then a second starter fouled out of Saturday’s Class D Final as Southfield Christian tried to catch Adrian Lenawee Christian with only a few minutes remaining.

Fortunately for the Eagles, they had a few more players left with experience finishing a championship run.

Southfield Christian had never during the last three seasons played from situation it faced early Saturday afternoon. But a number of its players had helped win one or both of two straight MHSAA championships – and that no doubt assisted those left on the floor as they claimed a third.

“It was tough once I saw we were losing Lin and Damarco for a few quarters. My whole objective was to keep the game as close as possible,” Evelyn said. “I thought we were going to come out with the win, through the whole game and everything. It was good to finally be right.”

Evelyn, who started last season’s Class D Final and came off the bench in 2012 as a freshman, also had seven rebounds, four assists and four steals and handled the ball almost exclusively after Hunter fouled out with 16 points, 3:47 left to play and the Eagles trailing 54-51.

The 6-foot-6 White fouled out just more than a minute later with only two points, but five rebounds and five blocked shots after spending most of his morning defending Lenawee Christian’s trio of 6-7 post players.

But Evelyn had plenty of help down the stretch. Sophomore guard Jalen Bouldes played only 38 seconds during the closing minutes, but scored, was fouled and made the ensuing free throw to give Southfield Christian a 56-55 lead with 3:09 to play. Brown scored a minute later to push the lead to three. Evelyn then made five of six free-throw attempts over the final 1:13 to keep Lenawee Christian just a few points short. 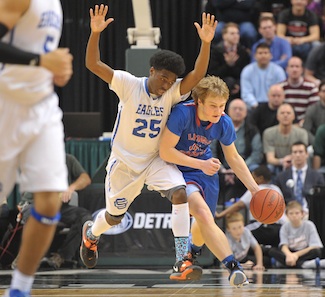 “We’ve never had this where all of our main guys were in foul trouble. Other guys like Harding (Fears) and Benny (Cookinham) had to step up,” Eagles coach Clennie Brundidge said. "I’d put (Hunter and White) back in here and they’d get another foul. I told them that at the end, our depth was going to win this.”

Fears grabbed eight rebounds in 12 minutes and junior guard Kameron Garner – a starter last season who this winter came off the bench – had five points and five rebounds despite taking a hard fall during the first half. Brown had only four points, but both baskets put Southfield Christian up at points in the game.

Lenawee Christian (21-5), an honorable mention in the Class D poll heading into the postseason, came back from an early nine-point deficit to make it back-and-forth over the final three quarters.

Senior center Kingsley had 22 points on 7 of 11 shooting from the floor and with sophomore forward Maxwell (11 points) allowed the Cougars to slow the game’s tempo and keep Southfield Christian’s usually active fastbreak to only 11 points.

“We wanted them to come beat us at our game, and I think for the most part we were able to control tempo,” Lenawee Christian coach Scott McKelvey said. “Our free-throw shooting hurt us (19 of 31), but we got opportunities and we couldn’t ask for anything more than that. It’s a team that probably no one in the state thought we could beat.”

“If we could’ve had two more minutes,” Kingsley added, "I’m pretty confident we could’ve changed something.”

Senior forward Grant Hohlbein, also set to accept an MHSAA Scholar-Athlete Award later Saturday, added 15 points for Lenawee Christian. The Cougars’ Semifinal on Thursday was its first since 2001, and the championship game berth was their first ever.

Brundidge said that after seeing Lenawee Christian in a summer game, he knew that was the team his Eagles would face if they returned for a third straight Final. Southfield Christian’s only loss this season was to Class A No. 5 Saginaw Arthur Hill, and it finished 26-1 and 74-5 over the last three seasons – good to tie for eighth-most wins over a three-season span.

“I’m in awe,” Hunter said. “My freshman year we lost in the first round of Districts to (Bloomfield Hills) Roeper, went 2-19. I never thought we’d be sitting here in this position with three state championships.”

HIGHLIGHTS: (1) Southfield Christian uses a block to start a fast break, resulting in a basket – and one – for Jalen Bouldes. The free throw gave the Eagles the lead to stay in the Class D finale. (2) With 12 seconds to go, Grant Hohlbein of Lenawee Christian scores on an inbounds pass and draws a Southfield Christian foul. Hohlbein completed the three-point play to pull his team within a point at 62-61.