Trip Riemersma couldn’t have scripted a better way to score the 1,000th point of his four-year varsity career.

The Zeeland East senior stole a pass during the fourth quarter of Thursday’s Division 1 District runaway against visiting archrival Zeeland West, then put the exclamation point on it with a breakaway dunk for points 999 and 1,000.

“It’s very special, one of many things this season,” said Riemersma, who finished with 20 points in the undefeated Chix’ 61-27 victory to start postseason play. “I couldn’t have reached this milestone without my teammates. They get me the ball when I’m open, and I just convert.”

It was actually just the latest chapter in a storybook season for Zeeland East (17-0), which completed the school’s first undefeated regular season since 2009 – the year that Korey Van Dussen and Nate Snuggerad led the Chix all the way to the Class B championship game, where they lost to Flint Powers Catholic.

This year’s group has similar aspirations after winning the Ottawa-Kent Conference Green title and being ranked No. 9 in Division 1 in the final Associated Press state poll, led by five senior starters who will all be playing college sports.

Riemersma, the 6-foot-3 son of former University of Michigan football standout Jay Riemersma, gets much of the attention with his ability to shoot, drive and play inside. He averages 17.5 points and 5.5 rebounds per game and will play basketball next year at Saginaw Valley State. 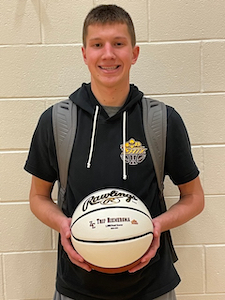 The inside work on both ends of the court is done by the Claerbaut twins – Nate (6-11), a game-changer defensively who averages 13 points, 10 rebounds and four blocks; and Brandon (6-5), who scores better than 10 points per game, along with averaging four rebounds and 3.4 assists. Many of those assists are to his brother as the pair possess a unique chemistry on the court, which they will take to Ferris State next year.

The point guard is 5-10 senior Adam Cassel, a Hope College football recruit, who brings the girth to a starting five known for its height and length.

Rounding out the Chix starting lineup is 6-2 senior Ethan Houghtaling – a throwback, three-sport athlete, who is the quarterback of the football team and the star pitcher on the baseball team (and committed to Western Michigan for the latter), but has no problem humbling himself and filling a critical supporting role on the hardcourt.

“Before almost every game, Ethan asks me: ‘Coach, what do you need me to do?’” said Zeeland East coach Jeff Carlson, a former standout himself at Holland and later Hope College. “I’m really blessed with this group. They are all phenomenal athletes, they are all competitors and they are all unselfish. That sure makes coaching a lot easier.”

Next up for the Chix is a Saturday District Final matchup with neighboring rival Holland West Ottawa, which went to overtime to down Hudsonville in Thursday’s opening game. Tipoff is 7 p.m.

Houghtaling is normally well into baseball season by now, but he has no problem at this point with leaving the bat and glove in the garage for a couple more games and, who knows, maybe a couple more weeks.

“This is the season we have been working toward since seventh grade,” explained Houghtaling, who had his typical workmanlike performance Thursday with six points and eight rebounds. “Even though we are unbeaten, our mentality is to go out every game and prove we are for real and to keep adding to it.”

He is savoring every moment, as his last three seasons have all been cut short or eliminated by COVID-19. 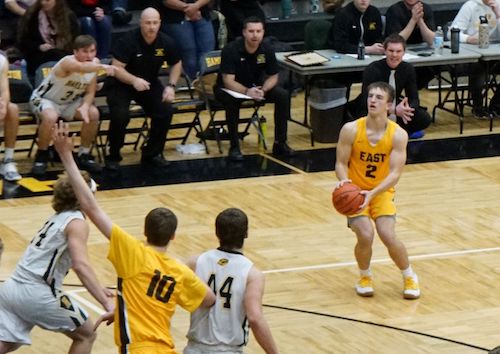 The Chix finished 16-6 last basketball season, which was truncated during District week by the pandemic. Houghtaling’s junior baseball season never got started, and his senior football season ended abruptly with a 4-2 record when East was forced to forfeit its Division 3 District opener due to coronavirus cases in the program.

“I am so happy for these kids, that they have been able to have the type of season they’ve had,” said Carlson, who is in his second year as the Chix head coach and is assisted by Tyler Bartolacci. “They deserve it.”

Now the question becomes: How far can they go?

The Chix certainly put on a clinic Thursday, against a talented Zeeland West team which gave East its closest game of the season, a 44-39 victory back on Feb. 23. This time, the Chix put on the clamps defensively and got out and ran to a 19-3 lead after one quarter, extended it to 31-9 by halftime and cruised from there.

The only thing missing was the usual standing-room-only crowd of close to 3,000 fans when the two Zeeland schools meet. Carlson would love to have those crowds, but knows this team doesn’t need that to get pumped up.

The Chix are so focused and serious that Carlson often starts practices with a game of tag to try and lighten the mood.

The problem is, as Riemersma explains, even tag soon becomes ultra-competitive with this year’s team.

“It’s team-bonding stuff and supposed to be a little bit of fun before we get focused in on basketball,” said Riemersma. “But we all want to win everything we do, so it usually gets pretty intense, but I guess that’s a good thing.”

PHOTOS: (Top) Zeeland East 6-10 senior center Nate Claerbaut, right, goes up for a clean blocked shot, while his twin brother, 6-5 senior forward Brandon Claerbaut, applies pressure from the other side during a game last season. (Middle) Zeeland East senior Trip Riemersma poses with the commemorative basketball he was presented after scoring his 1,000th varsity point in Thursday's 61-27 Division 1 District Semifinal win over rival Zeeland West. (Below) Zeeland East senior guard Ethan Houghtaling sizes up a 3-point shot. Houghtaling, who played quarterback in football for the Chix, is a three-sport athlete who will play baseball next year at Western Michigan University. (Top and below photos contributed; middle photo by Tom Kendra.)