With three players standing 6-foot-6 or taller, the Eagles soared over Iron Mountain in size.

But one advantage Iron Mountain had was Foster Wonders, a 6-5 senior guard with more than 2,000 career points who could see over the defense and wasn’t bashful about launching 3-pointers.

He kept the Mountaineers in the game, led them into overtime and all the way into Saturday’s Final against Flint Beecher – scoring 34 points total in a 54-50 thriller over Schoolcraft (19-2) at the Breslin Center.

“They were very physical, and they made it hard for us to do anything,’’ said Wonders, who was already thinking about Flint Beecher. “We changed the offense in the second half, and we were able to find some openings. I just tried to stay aggressive.’’

The Mountaineers (19-0) made their final push with under five minutes left in regulation on a 3-pointer by Ricky Brown to reduce the deficit to 33-32.

After a timeout, Wonders scored in the lane to give Iron Mountain a one-point lead.

However, Schoolcraft junior Ty Rykse and Wonders traded threes before senior Bryce VanderWiere scored inside to keep the Eagles up one.

Not to be denied, Wonders drained a triple, and the Mountaineers were up two, 40-38. Teammate Jurgen Kleiman scored inside while being fouled. He missed the free throw, but Iron Mountain was up four.

Schoolcraft’s Tyler DeGroote scored with 54.2 seconds left to cut the deficit in half. Each side turned the ball over before a steal and basket by Jonathon Able tied the score again with 24.3 left – and that’s where it would remain, forcing overtime. 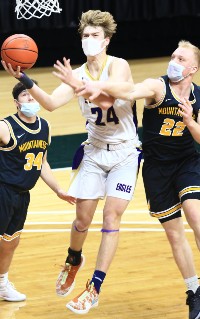 Wonders had scored 13 points in the fourth quarter, and he then made four free throws in overtime.

“He hit his average, an average game for Foster,’’ said coach Harvey Johnson. “You see FAMILY on the front of our warmups. These guys really love each other. We matched their physicality. We competed.”

Wonders scored six points in the first quarter to give the Mountaineers an 11-7 lead as Schoolcraft shot just 22.2 percent from the field during the opening period.

The Mountaineers held on to an 18-17 advantage at halftime, but Schoolcraft pulled ahead in the third quarter. Iron Mountain went on a scoring drought and Rykse’s floater put Schoolcraft up six, 30-24, late in the period as the Eagles seemed to wear down the Mountaineers and force most of their scoring to come from the outside.

With eight minutes left in regulation, Schoolcraft maintained its six-point lead. But Wonders scored five straight points to get Iron Mountain to within three, 32-29.

“I thought we did a pretty good job on him,’’ Schoolcraft coach Randy Small said of his team’s defense on Wonders. “He hit one from 28 feet. He made some big shots. We had a hard time scoring.’’

Wonders sank 13 of 24 shots from the field, including 4-10 3-point attempts, and also grabbed eight rebounds.