JACKSON – It was not necessarily a bad thing to be behind early in the final game of the MHSAA Division 3 boys and girls Bowling Finals on Friday at Airport Lanes in Jackson.

Livonia Clarenceville won the boys championship, and Battle Creek Pennfield captured the girls title after both trailed by roughly 40 pins in the last game.

Pennfield qualified sixth of the eight girls teams coming out of the morning session and traveled a tough road to the finals. In the quarterfinals, the Panthers knocked off Richmond, last year’s MHSAA runner-up, and then Pennfield defeated defending champion Flat Rock in the semifinals.

“We were just trying to keep calm and just relax and believe we could do it no matter what,” Hinds said of the early deficit. “It feels amazing.

“(Friday) morning we had a little trouble, but it was all our energy. We were all excited and we kind of calmed down and let it go.”

Two years ago, Pennfield lost in the title match to Wyoming Kelloggsville.

“This was our second time in the finals, and this year we got all the way here and took it home,” Roach said. “Taylor England did fantastic. She’s been bowling with the JV girls all year, and she really came through, but my seniors Loretta Hinds and Ashlynn Horvath really carried the team.”

Horvath was overcome with joyful tears after the conclusion of the match and talked about keeping the faith when the team was behind.

“We talked and we cheered each other on,” she said. “When maybe one person is down, we bring that person up, and we just go at it with each other. We just bring each other up.

South Christian, seeded fifth after qualifying, defeated Wyoming Kelloggsville in the quarterfinals with the second-highest total of the eight teams left and then beat Ishpeming with the top total of the semifinalists. 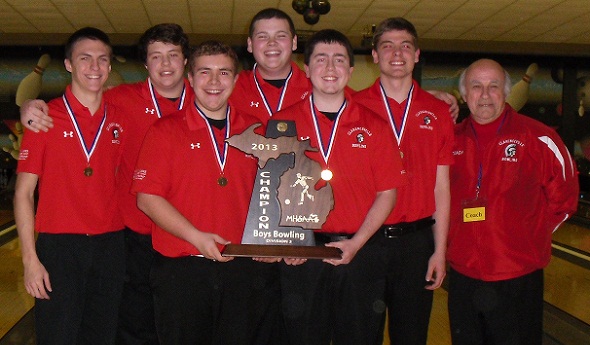 On the boys side, Clarenceville was seeded second coming out of qualifying and had the third-best total of the eight teams in the quarterfinals when it defeated Bridgeport. In the semifinals, Clarenceville edged South Christian by 30 after building a 70-pin lead in the Baker games.

However, Ishpeming – the No. 1 seed – trailed by just six after the two Baker games and started strong in the final match to take a 40-pin lead by the third frame.

“I think in the third frame I looked, and we were down about 40 pins,” Clarenceville coach Phil Horowitz said, “and I said, ‘We’re only down 40 pins. We have seven frames to go guys. All we have to do is pick it up and start moving.’ “

The Trojans had some extra motivation as well. Last year, they lost in the quarterfinals by one pin.

“When we started the season this year, I said, ‘Guys, we’re going to go all the way,’” Horowitz said.

Six Clarenceville seniors took to the lanes for the final match as Tyler Fox led the way with a 212. Fox was in an uncomfortable position for him: Horowitz had Fox bowling fifth as the anchor bowler.

“I kept switching the lineup,” Horowitz said. “I had everybody in the first spot. In fact, the anchor bowler the last game is somebody who does not like to bowl anchor. He’ll tell you right off the bat, ‘Don’t put me fifth.’ I did because he was bowling good, and he was the only one who was hitting the pocket consistently.”

“I’m not a very good fifth bowler,” Fox said. “I usually crack under nerves, but I just knew I had to come through.

“This is incredible. I never really imagined we would win.”

Kaylup Richards added a 181 for Clarenceville, while Kyle Kissandi shot 175 and Ricky Rutembar rolled 165. Shane Martin and Matthew Thayer split the final game for a 170.

“It’s definitely not believed right now,” Kissandi said. “Hopefully, it sets in by (Saturday) when I have to bowl for individuals, but it’s definitely unbelievable.”

Ishpeming defeated Hudsonville in the quarterfinals and then topped Pinconning in the semifinals before losing to Clarenceville.

It will be a new team next season at Clarenceville, which fielded all seniors Friday. It also will have a new coach as Horowtiz said he is resigning after five years.

“When my granddaughter started bowling on another team this year, I said this is it,” he said. “What a way to go out.