By Andrew Frushour
Second Half

BATTLE CREEK – Jonesville’s boys bowling team made it all the way to the championship match at the 2012 Division 4 Bowling Team Final before falling to Rogers City.

The Comets pledged to return and win the school’s first MHSAA title in any sport.

And then, last season, they failed to advance from their Division 4 Regional.

That only added Jonesville’s resolve this winter – especially with four key seniors competing together for the last time. Their run through Friday’s Team Final was not an easy one – the Comets qualified seventh for match play, won their Quarterfinal by only a pin and trailed in the championship match after the Baker set.

But by the sixth frame of the individual games, those seniors knew.

Jonesville outlasted Ithaca 1,1153-1,094 to claim that first championship. Meanwhile, on the girls side, Vandercook Lake added its third MHSAA title in four seasons.

“It’s unexplainable, really. It’s been our goal all year, been our goal since last year. Sophomore year we finished second, and it was a goal for us ever since,” Jonesville senior Reed Baker said. “Up and down, crazy. We battled it, really battled it.”

Ithaca’s boys, who also didn’t make the Finals in 2013, dominated Friday’s tournament up until the final match.

The Yellowjackets finished first in qualifying play, then beat Burton Bendle by 241 pins in the Quarterfinal and reigning champion Riverview Gabriel Richard by 126 in the Semifinal. Jonesville, meanwhile, got by Grass Lake only 1,207-1,206 in the quarter and Sandusky by 30 in the semi.

“All along, we said we were doing it for the seniors. We said we’re going to send you off with a state championship,” Jonesville boys coach Matt Molinaro said. “As soon as we made match play, we looked like the weight of the world was off our shoulders. It was a whole different team. We really bowled badly in the morning and still made it. As soon as we figured out we made it … we just kept fighting.” 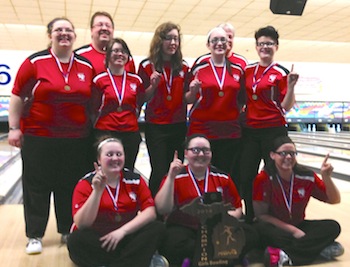 Ambs, who won the Division 4 Singles title in 2013, was the lead-off bowler in all four of her MHSAA Team Finals – and that was by design. Todd Reichard told her during middle school that she would be his lead-off some day – the bowler who would made good shots, pick up spares and give his team the lead every turn.

Vandercook Lake finished 244 pins better than the field during qualifying and won its Quarterfinal and Semifinal matches by 236 and 228 pins, respectively, before defeating Rogers City in the Final 1,273-1,031.

Ambs rolled a 203, with Bunch leading with a 244 and Kelsea Reichard adding a 180 in the championship match.

“I think it was one of the most dominating performances I’ve ever seen,” Todd Reichard said. “Any one of the three is going to bowl good, and once one of them gets lined up, I think everybody gets comfortable. They just make spares and throw strikes, and it’s fun.”

The Jayhawks had matched up against Sandusky the last three MHSAA championship matches, and Sandusky finished second to Vandercook Lake in qualifying. But Rogers City threw a wrench into another potential rematch by beating Sandusky by 37 in their Semifinal.

Nicole Bannasch led Rogers City with a 179 in the Final.

“There’s still good competition out there for us. Rogers City surprised us and gave us a run for our money in the Bakers,” Ambs said.

“Our team is young. Most of the kids we have right now are sophomores – it’s just our three seniors – and that makes me feel like they are going to (continue our run).”