They were followed by Sault Ste. Marie with 48 and Houghton with 75.

“Marquette is probably the best team we’ve had up here in 20 years,” said Sault coach Jim Martin. “We knew they were going to be tough. We also had a real good team this year, probably our best team in a decade.”

Marquette junior Carson Vanderschaaf was crowned individual champion for the first time by covering the 3.1-mile course at Gentz’s Homestead Golf Course in Chocolay Township in 16 minutes, 45.1 seconds. He was followed by Houghton senior Eric Weiss (17:04) and Gladstone junior Drew Hughes (17:23.7) on a sunny and seasonably cool day.

“I wanted to stay up front and see what happened,” said Vanderschaaf. “My legs just felt good today.

“We have good team dynamics. We all train together. I don’t really know what this means at this time, but I’m looking forward to track next spring. This is a big confidence builder right now. It was real nice weather for running. I was afraid it would rain (as forecast by the Weather Channel).” 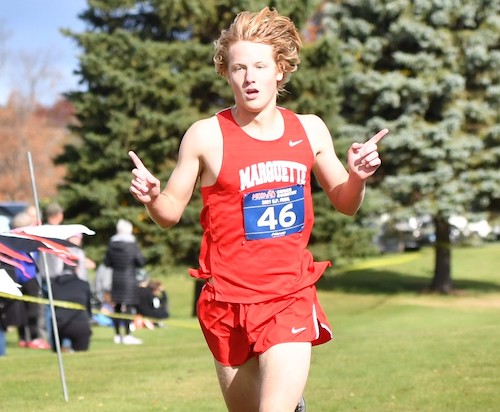 Hughes was undefeated this season prior to Saturday.

“I was really nervous coming in here, but I did better than last year,” he said. “Anxiety plays a big part. I cut 12 seconds off from my freshman year on this course. I still had a good day.”

Painesdale Jeffers placed four in the top five and earned its first Division 2 team title with 22 points, followed by Ironwood with 50 and Manistique at 62.

For the Jets, this marked their first title since 2009 when they were crowned Division 3 champs.

“We got some fast boys here today,” said Jeffers coach Sam Kilpela. “We moved up to D-2 and last year we were runners-up. It felt weird jumping up to D-2. The start was real fast, but the guys ran smart.

“We have a real young team, and our middle school crew is strong.”

“Tavin has been running since middle school,” said Kilpela. “In the last couple years we started getting competitive.”

Dollar Bay kept its Division 3 crown with 57 points, followed by Stephenson with 63 and Brimley with 77. 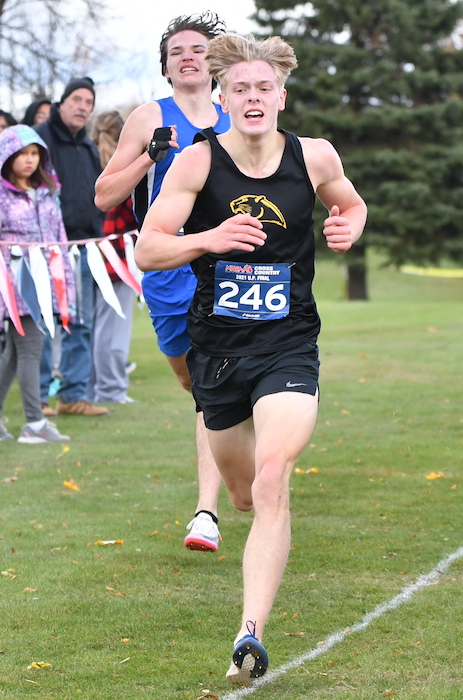 “We have fun running on the tough courses,” said Dollar Bay coach Matt Zimmer. “Then you get on a golf course and you think it’s going to be an easy course and it really isn’t.

“The Copper Country conferences were well represented. Both of our teams ran very well. We have three girls who have been with us since junior high. We’ve become a family. There’s absolutely a lot of camaraderie, and it’s a family atmosphere.”

“I’m pretty happy with my time,” said Nordine. “I really tried to push it in the first mile. I ran a little more conservatively in the second mile, then tried to pick it up in the third.

“This is a pretty big confidence builder, I guess. I was a little nervous coming in here because Nik beat me in the (Copper Mountain) conference race last week. That definitely motivated me for the U.P. Finals.”

Thomas was happy with his and the team’s success.

"I’m so proud of our team,” he said. “After the girls took second, it woke us up. We knew we had to do our part. It’s real competitive in our area. It’s just a great day for our school.

“It was so cool running with Jonah again. At 2½ miles, we were just talking about how great it was to be running together again. We weren’t really running against each other. We were running with each other.”