BROOKLYN — When Caleb Jarema crossed the finish line at Michigan International Speedway a year ago, a bull’s eye was painted on his back.

Having placed second in the MHSAA Lower Peninsula Division 2 cross country race behind Fremont senior Nathan Walker, Jarema automatically became the man to beat in 2021 as the only non-senior in the top four.

Jarema fulfilled the promise he showed at MIS as a junior, winning the Division 2 race Saturday with a time of 15:22.22.

“I feel like I’ve had somewhat of a target on my back,” Jarema said. “I was more worried about the team. Obviously, I think a little bit about, ‘I want to be individual champion,’ but my focus this year is just trying to get the team to win.”

Pinckney, it turned out, finished fifth for the second year in a row.

The Pirates have a rich cross country tradition, having won three consecutive Division 1 championships from 2005-07. During that time, David Emery (2006) and Brian Hankins (2007) led Pinckney by winning individual championships. 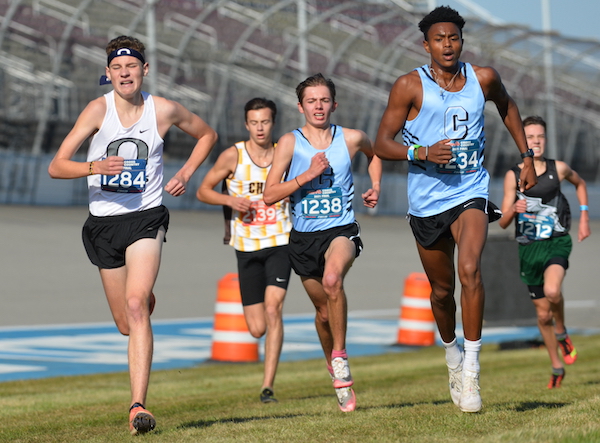 Now Jarema has added his name to that legacy.

“We have this wall at Pinckney of people who have been all-state,” Jarema said. “It’s in our athletic hall, so every day I walk by and see Brian Hankins and David Emery, who were state champs. It’s a little thing that reminds me every day what I’m working for.”

Pinckney was still in Division 1 during Jarema’s first two years of high school. He didn’t qualify for the state meet as a freshman, placing 38th at Regionals in 17:18.2. As a sophomore, while also playing varsity soccer, Jarema qualified for the Division 1 Final by taking 11th at Regionals. He showed potential by taking 38th in the MHSAA Final in 16:12.8.

Like former Grand Blanc star Grant Fisher, he gave up soccer his junior year, in Jarema’s case because of the toll playing both sports was taking on his body.

“I definitely miss soccer,” Jarema said. “(Cross country) has kind of just become my home. I love the people.”

After five top-five finishes in Division 2 over the last six seasons, Otsego won its first MHSAA team championship by a 135-147 score over Chelsea.

Chelsea could be primed to be crowned champion next season, as the Bulldogs were led by sophomore standout Connell Alford’s fourth-place time of 15:42.64 and had three juniors take places two through four in their lineup.