Sleeman’s run at Pioneer, however, has not been long as compared to a cross country course. It has been long in terms of a marathon.

This fall, the 79-year-old Sleeman is coaching his 50th boys cross country team at Pioneer, and fittingly, it is ranked No. 1 in Lower Peninsula Division 1 and a serious contender for the MHSAA title. He took over the program in 1968 – just a month before Al Kaline, Denny McLain and Mickey Lolich led the Detroit Tigers to the World Series title.

Those former Tigers are long retired. Sleeman still relishes everything about his coaching career. While running is his passion, the relationships he has formed with his athletes are the everlasting rewards.

“Recently, I just saw one of the guys from my first team,” Sleeman said. “My first team stands out; those guys will always be my first team, and they’re in their 60s now. When I see them, it’s like we’re old friends.

Pioneer won Class A titles again in 1993 and 1994 and added a Division 1 title in 2008. If it can win a title this year, Sleeman and Pioneer would have MHSAA Finals titles in the top division in four consecutive decades. And Sleeman has the team that can do it.


Sleeman has a pleasant problem with his 50th team.

“I’ve got a thing most people would be glad to have, but it is kind of a problem,” he said. “I can run seven, but I have eight kids who deserve it. One kid is on the sidelines every meet, and that is something I have fumbled with. I don’t want to leave anyone out.

“I just look at the total picture and try to be as fair as I can to everybody. One of the underlying thoughts is whoever has the last best performance gets the nod unless there are other extenuating circumstances. I try to focus on who has had the most recent success, so it’s sort of a challenge for them to match up to that.”

Pioneer has five seniors and three juniors, and all of them are capable of scoring. On Thursday, Pioneer had seven of the top 14 finishers as it won the third and final Southeastern Conference jamboree of the season. 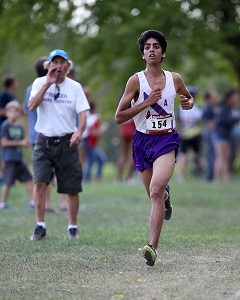 Junior Nick Foster has been the top runner this season. Foster, who finished seventh in the Division 1 meet last year, set a course record Thursday at Hudson Mills in Dexter as he won in 15 minutes, 29.5 seconds.

“I think he can be top three in the state this year, but I’ve always thought he had that kind of capability,” Sleeman said of Foster, who might be the team leader but also has plenty of help.

“We have a luxury this year in that we have great depth. Actually, from one through eight, all have struggled at times and all have done good.”

Sleeman said he has one other luxury this season.

“One of the greatest things that is going on right now is that I have incredibly supportive parents who are willing to do all sorts of things to help me and help the team,” he said. “They are very involved. In past years I’ve had very supportive parents in terms of having a positive outlook toward what I am doing but they didn’t necessarily get involved.

“This set of parents is very involved, and they are involved in a positive sort of way.”


Sleeman is a graduate of Fenton High School, and around that time he fell in love with running.

“I always just loved running, going back to high school,” he said. “I was running back when nobody else was, and people thought I was nuts.

“I liked the feel of it. I remember the first long run I did. We were all out at the local lake called Silver Lake. It wasn’t terribly far from town, but everybody else got a ride back. I ran back, and everybody thought I was nuts. I’ve been running literally ever since.”

Sleeman’s path to Pioneer was not a direct one. He enrolled in the Air Force. He went to college. He even did a stint in the Peace Corps. But all the time, Sleeman continued to run.

However, one thing eluded him: A steady job.

“Prior to being 30, I tried my best not to have a regular job,” Sleeman said. “I didn’t want to be tied down; I wanted to experience things. All of a sudden after I got my master’s degree, I kind of looked around and thought that I needed to get a job.”

Sleeman landed at Pioneer, where he taught for 27 years. After he retired from teaching, Sleeman stayed busy with a job in admissions at the University of Michigan. And he continued to coach Pioneer.

It was a different time in 1968. Running wasn’t very popular, and nobody had a portable phone or any type of electronic device that could cause a lapse in concentration.

Sleeman had to adjust his ways throughout the years to stay current with his student-athletes. But the running has stayed the same.

“The only difference is we have better stopwatches and GPS, and everything is online,” he said. “We have automatic timing at the finish line.

Sleeman said sometimes he has to recruit the classes and halls at Pioneer for runners. Other times, the program recruits itself.

“Some kids come to you interested, and some kids you just pass in the hallway and you just kind of blind side them a little bit and start talking about it,” he said. “A lot of them look at you like, ‘What are you talking about?’ Then you get the ones who follow through. I’ve got kids on the team now that I didn’t know who they were when they showed up.

“It’s always been a mixture, not one way or the other. They just show up on their own. I got an e-mail this week from a kid who said, ‘I might get cut from the basketball team. If I do, I want to run. What do I have to do?’ OK, sounds good to me, and I don’t even know who he is. When you get something like that, you hope it’s because he has heard something good about the program.”


Many years ago, Sleeman thought it might be getting close to the time to retire.

“Just throwing a number out, it could have been 20, 25 years ago when things weren’t going well, and it was kind of a me generation at that time,” Sleeman said. “I’m thinking, ‘Why am I doing this?’ I worked my way through it, and I realized that it was just a momentary thing, and I had to do like my athletes. I had to make something out of it myself. I can’t rely on others to make it better for me.”

It wasn’t the only time he thought about retiring.

Sleeman offers no hint at his future plans, but he sounds like he still enjoys coaching and staying active.

“One of the things that has been beneficial to me is that I’m in pretty good health. I have some aches and pains, and in the last couple of weeks, I’ve been able to be more active. I don’t know what happened. I’m just glad that it is happening. I’ve been able to go around at the meets from Point A to Point B better. I ride my bike from Point A to Point B to see what they’re doing.”

It would seem like, at age 79 and still so active, Sleeman is setting a perfect example for his student-athletes. But his mind is working as fast – if not faster – in an effort to help.

“My personality is don’t mess with me,” he said. “I try to teach the kids what is happening and why it’s happening. I try to make everything as clear as I can in an education sort of way, but as I do that, inevitably it comes down to them listening. I tell them to look at me when I’m talking to them.

PHOTOS: (Top) Ann Arbor Pioneer boys cross country coach Don Sleeman has been guiding runners on the course for 50 years. (Top middle) Sleeman yells to Angad Sidhu as Sidhu passes him during a race. (Bottom middle) Sleeman signals to approaching Nick Foster. (Below) Sleeman has led Pioneer to five MHSAA titles and could have a sixth champion on the way this fall. (Photos by Peter Draugalis.)