Mike Peter knew his Unionville-Sebewaing boys cross country team would have to make adjustments for the 2020 season, and deal with a different set of circumstances.

And that was before COVID-19 gripped the nation.

“We lost some team dynamic – a team isn’t all about time and place all the time,” the USA coach said. “Two of our senior boys that left the team, they really brought a lot just as teammates to our boys side. We’re trying to find that again. It takes time to rebuild that again when the team dynamic changes. We’ll have to fight a little harder this year and try to find our new normal.”

The Patriots are coming off a runner-up finish at the 2019 Lower Peninsula Division 4 Finals, the best finish in program history. That followed a fifth-place finish the year before which had been the program best.

While they’re off to a slower start this season, they feel the pieces are there to continue that statewide success.

Three of the five runners who scored at the 2019 Finals are back, led by Langmaid who had an all-state finish at 22nd. Juniors Ty Pavlichek (38th) and Jacob VanHove (53rd) are back as well. The Patriots are without all-state finisher Bentley Alderson, who placed 16th as a junior but has decided to play soccer his senior year.

But the strength of USA’s 2019 team was its pack – all five scoring runners a year ago finished among the top 40 team scorers at the Final. That pack is something the Patriots are currently trying to establish.

“Since Day 1, we’ve been really close, really tight, and Coach has preached pack running,” Langmaid said. “That would be one of the biggest successes of how we run, and that carried over to how tight we are.”

While that pack is still looking to come together on the course this season, it was a big benefit through the spring and summer. With track season canceled because of the pandemic, and in a world of social distancing, Peter said his team did a good job of getting together to run in small groups. 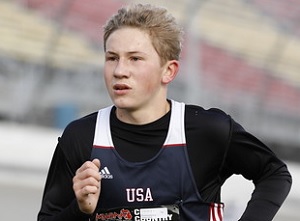 “The nice thing is that there’s a brother and sisterhood with our group,” Peter said. “They are fantastic about texting each other, communicating with one another and getting out for a run. Once we knew track wasn’t going to happen, it was just about packing on miles, and I think for the mental health of a young person who is a person who competes, that was important. Our team is really good about reaching out to each other, and luckily, we didn’t have to meet to do it.”

Staying focused on running helped, but it wasn’t always easy.

“At times I wasn’t,” Pavlichek admitted. “I slowed down and didn’t run as much. When it came closer to the season I started to run more, and I was just hoping we could have a season.”

What helped them get through it, though, was each other.

The Patriots have competed twice this season, at their own quad and the Ithaca Early Invitational. They were second in the quad (losing via tiebreaker to Mayville), and fifth at Ithaca.

“It’s hard to come out of a season where you’re second in the state and not feel that pressure again,” Peter said. “Sometimes, I think after having a year where we got first place at almost every meet, it’s hard to come back and uphold that. There’s an unspoken pressure that kids put on themselves, and they have to be OK with a second or third some of the time, and not always running your best time.”

While the results haven’t been there yet for the Patriots, just being back in competition and wearing the school colors felt like a victory.

“From my perspective, it was just wonderful to see a uniform of any of the schools,” Peter said. “It was nice to see kids from other communities at least roughly near each other, and competing. It was nice to see the joy they had to do something they loved.”

PHOTOS: (Top) USA's Bryce Langmaid (736) races to an all-state finish at last season's LPD4 Final at Michigan International Speedway. (Middle) Ty Pavlichek is another of three USA scorers back from the 2019 runner-up team. (Click to see more from RunMichigan.com.)