GLADSTONE — A tie-breaker was needed to determine a team champion Thursday at the Upper Peninsula Division 3 Boys Golf Final.

Cedarville and Ontonagon finished with 351 strokes apiece on this warm and humid day at Irish Oaks Golf Course.

It was Ontonagon, however, crowned champion for the first time since 2006 based on a lower score by its fifth golfer.

Ontonagon’s No. 5 golfer, senior James Domitrovich, shot 100 and Cedarville’s fifth score was 104, enough to give the Gladiators the edge.

“The kids on both of our teams have a great work ethic,” said Ontonagon coach Adam Spaulding. “The boys and girls are out there every day practicing, and the results have shown. The kids have come a long way in three weeks. Our course (Ontonagon Country Club) didn’t open until May 12 (due to weather and course conditions), but they understand the situation.” 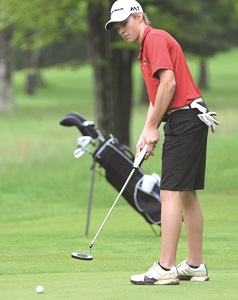 “In the first nine holes, I played solid,” said Hedtke. “I hit the ball straight, and staying on the fairway makes the game a lot easier. My short game was real good, and my putting was even better. It’s a great feeling to do something like this at the end of the year.”

Hedtke, who plans to enroll at Northeast Wisconsin Technical College in Green Bay this fall, fired a 35 through his first nine holes. A brief downpour then provided its share of challenges during the second half of the tourney.

“It was pouring for three holes in a row, and I got a little frustrated for about 4-5 holes,” said Hedtke. “That can get into your head very quickly. Then, I became a little more patient and birdied one hole.

“A 35 in the first nine set the tone. We were waiting for the rain to stop, yet we wanted to keep playing at a fast pace. You just have to play through it.”

“That wasn’t bad at all,” said Cedarville coach Rob Freel. “Our second, third and fourth guys played about the same. I’m happy with the way we played. Our boys have a young group coming back, and our girls finished in a good place.”

Pickford junior Cody Campbell sank a hole-in-one, using a 9-iron on the No. 5 hole.

“It felt nice,” Campbell said of his tee shot. “It came off great and got a lot of elevation right away. It was jaw dropping. It was also very exciting. It’s a very rare event to have happen.”