The Irish played a practice round at The Fortress Golf Club a day before competing in the two-day tournament, and what was learned during that round played a crucial role in a back-nine surge that clinched their second-straight title.

“We try and come out the day before the event, and we were able to do that this year, and I would say it was very crucial,” Hackett coach Jim Holton said. “We stress, ‘We’re not here to shoot a score (Thursday), we’re here to learn,’ and that’s what we did when we got here.”

Hackett finished with a two-day total of 640 strokes, finishing ahead of runner-up Lansing Christian by six. Charlevoix was third with 646, followed by Maple City Glen Lake at 677.

For Hackett, a course far from home felt familiar enough Saturday afternoon as it held off a Saturday morning surge from Lansing Christian.

About halfway through the round, the Pilgrims inched ahead, but it was the work done on the back nine that lifted the Irish to a victory.

Their scoring foursome of Tommy Keyte, Ben Bridenstine, Ryan Chafty and Niklas Johansson combined to shoot 158 on the back nine, while Lansing Christian’s top four came in at 166 down the stretch.

“I think we all went through a tough stretch there as a team,” said Keyte, who was the individual runner-up at 149. “Back nine, we just kind of locked in and we picked it up. Made some good birdies, made some good putts. Everything just kind of clicked together on the back. The practice round, we really focused on where we wanted to hit our golf shots. It wasn’t driver every hole, it’s 4-irons, hybrids – you have to place your tee shot because there’s trouble on every hole.” 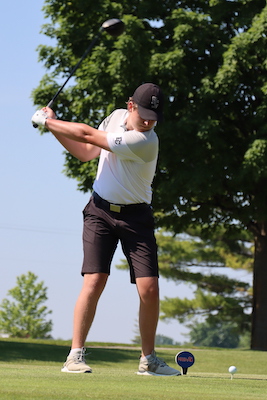 Holton said he and his team had identified the back nine as the key during Thursday’s practice round.

“We realized the back nine can cause problems for teams,” he said. “We discussed that in the practice round, made our gameplan based on the holes and what we needed to do to keep ourselves ahead of the other competition. We started off great, had a little lull, Lansing Christian went by us and I was a little concerned. But I knew those tough holes were ahead, and I knew we planned well for those holes.”

The second-straight title for Hackett was actually the team’s second in three years, as there was no 2020 season. The senior-laden group – Keyte, Bridenstine, Chafty and No. 5 player Grayson Walters are all seniors – was focused on retaining their title, despite the year off.

“It felt great,” Keyte said. “The whole team was really excited for this weekend, and we’ve been waiting for this for two years now, because we were trying to go back to back. We did it today, and we had a great time. It was a grind out there.”

While Hackett was repeating as team champ, a new face was dominating the course in the individual race. As a sophomore, Stalcup was playing in his first MHSAA Finals, and he led nearly wire to wire. He essentially put the tournament away with an eagle on No. 1 (his 16th hole of the day) on Saturday.

“I hit my drive in the right heather, so I took a 5-iron out from about 230 (yards), and it almost went in, actually,” Stalcup said. “It was, like, not even a foot for a tap-in eagle and it got me back into it with a big lead.”

Stalcup had played the previous four holes at two-over par, and while the eagle ended up just padding his lead, at the time it seemed necessary.

“I thought it was close; I didn’t know if I was winning by a bunch or not,” he said. “So that helped a lot, for sure. I was happy then. I didn’t look at the leaderboard. I don’t want to know until the very end.”

Stalcup had played at The Fortress earlier in the season, and it was kind to him then as well.

“I love the course; I love it,” he said. “It’s one of my favorite courses, actually. I always play good here. I played good earlier in the season here, too. I putt really well on these greens, I love these greens. I made a lot of long putts. It helps a lot, too, I hit it pretty far. I hit a lot of wedges into greens.”