HARRIS — The individual winner of the MHSAA Upper Peninsula Division 1 Boys Golf Final wasn’t 100-percent sure what his running score was until he stepped up to the tee on hole 18.

Marquette senior Joe Luke, seeing Menominee’s Brady Badker — a Great Northern Conference rival —  watching on from the end of the 18th hole, caught up and realized he had victory in his grasp.

“Just before 18, I had no clue (about my score),” Luke said. “There was this phone app we were using to keep score, and I wasn’t on my phone (beforehand) because I figured I would just put it all in afterwards so I could keep focus on my game. Then, once I got to 18, one of my buddies in the group told me Brady (Badker) was plus-three. So, I was like, ‘Oh, boy.’ I didn’t really want to know that because I was plus-one at the time.

“I came in, and I saw him up on the hill watching me, which is normal. We always played together in the normal GNCs. Then, I ended up bogeying the last hole, and I knew I had to come out with a bogey. I was probably a little bit nervous, but I was also very excited. Maybe a little teary too because it’s my last meet for high school.”

It wasn’t an easy win for Luke on Thursday in Harris. Despite the top two golfers finishing ahead of third place by five strokes, Luke edged Badker by just one with a 2-over 74.

“I didn’t think I was going to come in and win this. I just wanted to shoot a good enough score for the team for us to win,” Luke added. “I felt pretty confident with the team aspect for winning the UPs. It was really nice helping the team out there. Just coming into it, I knew probably after the front nine that I was even, so I was like, ‘I actually have a really good shot at this. I just have to keep playing the way I am, and maybe shoot even on the back too. Maybe I got this thing in the bag.’ It was really exciting. I definitely wasn’t expecting it, and I really enjoyed the round and the course and the people I was playing with.”

The rest of Luke’s team followed his example, as Marquette also earned the team championship by a five-stroke margin (325) over Houghton (330). The title was Marquette's first since 2013 and followed a runner-up finish to Houghton in 2019. The 2020 season was canceled due to COVID-19. 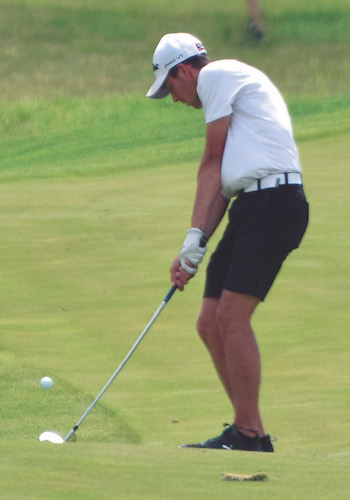 “It was fun to watch all five boys play well,” Marquette assistant coach Rick Rhoades said. “They all played solid. This course was playing pretty tough. This is one of the tougher courses in the U.P. It was just great watching them come together as a team. They’ve been playing good all year, so it was nice to cap things off with a win.”

Despite some missed strokes, Houghton coach Corey Markham was happy with his team’s performance.

“I thought it was a real solid performance for our team,” he said. “When you’re five strokes behind the first place, you look back and see a few places where you wish you could have shaved a stroke here or there, but I thought we had a great day on a great course.”

Luke and Badker both finished the front nine at par with two bogeys and two birdies for Luke and one apiece for Badker.

“Some of the harder holes (went better for me) as well,” Luke said. “It’s weird. It’s always the hard holes that I seem to birdie in. … Number four connected pretty good. Off of the tee shot, it was nice right in the middle, and I was able to pull a nice 8-iron up into the wind. Four was probably the big one because it's one of the hardest out there. A hole like that definitely improves the day.”

It was four holes into the back nine, on the 13th, that Luke gained separation. He birdied the dog-legged, long par-4, and it gave him the cushion he needed as he turned up a bogey on the hazardous 14th. He added two more bogeys on holes 16 and 18 for the 2-over finish.

Badker didn’t have the benefit of a birdie cushion entering the 14th, and after back-to-back bogeys and another on the 17th, finished 3-over.

It was a four-way tie at third with Houghton’s Marino Pisani and Brady Schmierer, Ishpeming Westwood’s Tyler Annala and Kingsford’s Matt Solda with 80 strokes apiece.

Following Houghton in the team standings was Calumet with 334 strokes, Menominee with 341 and Kingsford with 347.

Luke finished his thoughts with his thanks.

“I just want to say thanks to my teammates for all the years coming up,” he said. “Also, my family, they’ve been a huge support, and definitely coach Ben (Smith) and Rick Rhoades for being out there. It was a big support for them this year to be with me, and I definitely needed Rick for a few rulings to figure out the best shots here and there. It’s nice to have someone to be able to connect with. Thank you to everybody. It was an amazing experience. I really enjoyed it. Thank you to Brady too. I love the competition we had this entire year.”

PHOTOS: (Top) Marquette’s Joe Luke follows through on an iron shot during his run to the Upper Peninsula Division 1 individual championship Thursday. (Middle) Menominee’s Brady Badker sends an approach toward the green during the UPD1 Final. (Photos by Justin St. Ours.)