A lot has happened since Dan Alto and MacKale McGuire first met eight years ago around the game of golf.

Alto was helping out at the Cadillac Country Club. McGuire was playing there in the junior golf program.

Today, Alto coaches golf at Cadillac High School, and McGuire serves as the captain preparing to lead the Vikings into the MHSAA Finals next weekend.

“Mac is an extremely polite, determined young man,” Alto said. “He is an outstanding student, which will serve him well as he attends college and pursues a career.

“With his work ethic, I have no doubt that Mac is going to find great success in whatever he decides to do.”

McGuire has plans to play golf at the next level as he moves on to Kalamazoo College in the fall.

Many might assume the last few years that have passed since Alto and McGuire first met have been a struggle — but not McGuire. 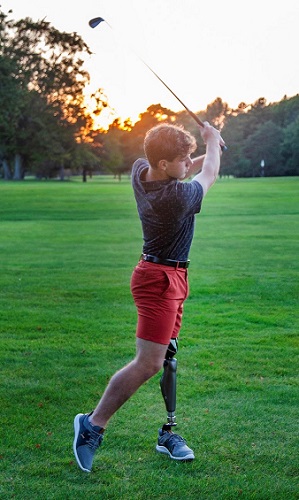 His left leg was amputated above the knee four years ago after a battle with osteosarcoma, a type of bone cancer.

McGuire is now preparing to walk at commencement. He looks back and sees only a varsity golfer, soccer player and theatre performer ready to take on the world.

“I just consider myself another person,” said McGuire, known as Mac to many. “I guess everyone has their differences.

“I guess mine is a more apparent kind of thing.”

McGuire learned to walk again with a prosthetic leg. He returned to golfing almost immediately and eventually played soccer and mastered downhill skiing. He’s been cancer free for more than five years.

When he steps on the golf course every day, he wants his teammates, coaches and opponents to see nothing more than a golfer. He’s seen all kinds of reactions to what others call a disability.

There’s no need to be politically correct around McGuire. In fact, he’d prefer you not be.

“Personally it (political correctness) just feels weird,” he said. “Just say it and get it over with.”

McGuire holds down the third golfing spot for the Vikings. He’s ready for some tough competition at the Finals after Cadillac qualified with a third-place finish at their Lower Peninsula Division 2 Regional.

“Mac is the kind of teammate coaches love,” said Alto, who with Brandon Bailey took over the Vikings golf program just as COVID-19 canceled the 2020 season. “He offers to drive younger teammates to practice when needed.

“He is never late for practice and leads by example … (and) always is happy for teammates that play well, even if he doesn't.”

McGuire’s tee shots get plenty of distance, but it’s the green game where he shines.

“I would say his true strength would be on the putting green,” Alto said. “He does a nice job of making the 5 to 6-foot putts that can save a round, and rarely three putts.”

Alto said McGuire is much more focused on his team’s success than his own.

“Like all golfers he wants to shoot a low score, but I get the feeling he wants to play well in order to help our team achieve goals more so than individual accolades,” Alto pointed out.

As a youngster, McGuire played a lot of soccer, basketball and golf. He really didn’t think soccer would be in his future when he made the decision to have his leg amputated in a Florida hospital. 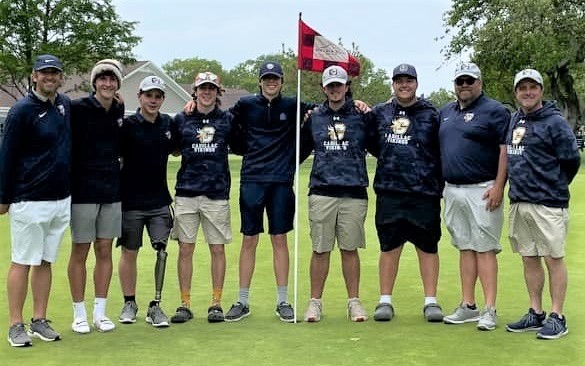 “When I had the amputation, I didn’t even think it was a possibility I’d be able to play soccer,” he said. “I didn’t think soccer was in the question.”

He served as team manager for the Vikings’ JV soccer squad is sophomore season. One day, he was given the chance to play in a game.

“The coach just randomly told me to get out there and start playing,” he recalled. “I found out it was something I actually could do if I decided to work at it.

“I was able to play varsity my senior year.”

Paul King, who took over the Vikings boys soccer program in 2021, had met McGuire before he entered high school. He’s thrilled he had a chance to coach him on the soccer field.

“Mac isn't ever going to let his disability be an excuse,” King said. “He pushes himself to be better every day at practice, and he encourages others to do the same.

“If he gets beat, he never blames it on his disability. He just works harder so that it doesn't happen again.”

McGuire’s competitive nature has served him well, his coaches note.

“Mac is extremely competitive,” Alto said. “He puts in as much – or more – work as anyone on the team.

“He has a very strong desire to play well.”

Growing up with two younger brothers, McCoy and MacGill, has fueled the Cadillac senior’s competitive fire.

“It is who I am. I have two younger brothers I have to beat at everything,” McGuire said. “I have a love for competing, no matter what it is.”

The competitive drive will serve well as he heads off to K College, King said.

“Mac has been through a lot,” King said. “If he can overcome cancer, I don't see anything slowing Mac down.

“I am so proud of him and consider myself lucky for having the chance to get to coach him and get to know the amazing person he is.”