NORWAY – There was considerable squirming at Oak Crest Golf Club on Thursday, and we're not even talking about the players who put on a good run for medalist honors.

No, the parents of the top two contenders tried to keep their emotions in check while taking the roller coaster ride as their sons battled for first place at the MHSAA Upper Peninsula Division 2 boys golf tournament.

Eventually, Tom and Michelle Kelly of Norway had a chance to exhale as their son Bryce emerged as medalist with a 78 to slip past 2015 champion Riley Thompson by a stroke. Kelly parred the last two holes while Iron River West Iron County's Thompson had a two-putt bogey-4 on No. 17 and then hit a short chip shot for a tap-in par-4 on the last hole.

Both contenders had a topsy-turvy back nine, to their chagrin and that of their parents. Kelly bogeyed holes 11-12-13 and doubled 15 while Thompson went double bogey-bogey to start and then hit an eagle-3 on No. 3 to pull within a stroke. He lost a stroke with a bogey on 14 but got one back with par on 15, and a birdie on 16 brought him into a tie that was broken on the short 17th.

"I can feel the good and the bad. I'm there cheering for him," Tom Kelly said. "It was hard when they had that swing. I could see the frustration in him." 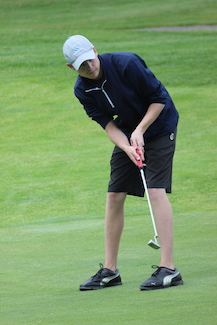 Chris Thompson also was hanging on as his son went up-and-down. "You're learning a life lesson," he said of the difficult finish. "Bryce regrouped after a couple of bad shots, then Riley regrouped after he thought he was out of it.

"I've coached too long (football assistant, his son was quarterback) and I know they have to work through it themselves."

Bryce Kelly had the key shot on No. 18 when he reached the heavily-sloped green (low on the front) from a tough sidehill lie in the 18th right rough. "I knew I had to hit a good wedge on 18," he said. With the ball below his feet, he added, "I did not want to go right. I wanted to get it left and stay below the pin. I hit a pretty darn good shot."

Riley Thompson's drive on 18 was about 25 yards ahead of Kelly’s and just inside the 100-yard marker. However, Thompson’s approach was well short as he decelerated his wedge and fell about 10 yards shy of the green. He chipped on and nearly jarred the approach for the tying birdie.

"I've never really been in a situation at the close," he said of feeling the pressure down the stretch. "I made a mental mistake (while putting for par) on 17."

The eagle provided a major boost after a tough front.

"It (eagle) gave me confidence, but then I made some mistakes on the next two holes," he said. "I'm happy the way I played the back nine. I dug a deep hole after 10 but I showed some ability to grind through and get back at it."

Kelly, who is thinking about trying to be a walk-on for the Northern Michigan University golf team in the fall, was excited with his title. "This is a little special, especially doing it on my home course really topped it off."

"I'm so overwhelmed. They are all pretty consistent," she said. "The boys were hoping to win. The kids can focus and do what needs to be done. I told them to focus on where they are." 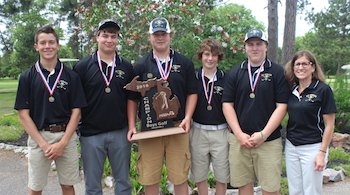 She said the Saints made a big statement last month by winning a tournament in Charlevoix, beating perennial power Traverse City West in the process. She used three juniors and two freshmen for the Final on Thursday.

Junior Carter Tallaire, playing at No. 1, said "we thought we had a pretty good chance at it." He added that the Charlevoix tourney "gave us a lot of motivation. That really set the tone. We realized we could play good."

PHOTOS: (Top) Kyle Johnson of Iron Mountain blasts out of a tough lie in a bunker shy of the 16th green at Oak Crest Golf Club on Thursday during the Upper Peninsula Division 2 Final. (Middle) Bryce Kelly of Norway watches his birdie putt attempt roll just past the 18th hole. His par enabled him to win medalist honors with a 78. (Below) St. Ignace won the team championship; the team includes, from left, Andy Metz, Carter Tallaire, Kody Rickley, Hunter DeKeyser, Drew Marshall and coach Claudette Brown. (Photos by Denny Grall.)