Hailing from a school of just 90 students, Eichhorn added one more statewide accomplishment last week by becoming the first in MHSAA boys golf history to win four Finals individual championships. Eichhorn shot a 66 at Irish Oaks Golf course in Gladstone to win the Upper Peninsula Division 3 championship by four strokes, lead the Wolves to their third straight team title and earn the Michigan Army National Guard “Performance of the Week.”

Eichhorn averaged 34 strokes for nine holes and 68 strokes for 18 this season, cutting roughly three strokes off his tournament average. With Carney-Nadeau having an enrollment of fewer than 100 students, Eichhorn was eligible to play high school sports as an eighth grader and tied for second at the 2013 U.P. Division 3 Final before winning the event the next four seasons. Entering his last Final on June 1, he was one of six players in MHSAA history who had won three individual titles and the most recent since Manistique's Mike Nagy won his third in 2012 (before going on to play at University of Tennessee).

His talents aren’t limited to golf, however; Eichhorn played basketball all four years of high school and joined the varsity in that sport as a sophomore. Over the next three seasons, and only 65 games, Eichhorn scored 1,068 points and made 244 3-pointers – the 3s are tied for eighth most in MHSAA history. As a senior playing for Jacob Polfus – who also coached his golf team – Eichhorn averaged 23.1 points, 5.5 rebounds and 5.2 assists per game and made a school record 86 of 171 3-point tries. He also set a single-game school record with 12 3-pointers against Milwaukee (Wis.) Academy of Science, and total connected on 50 percent of his shots from the floor and 88 percent of his free throw attempts this winter in helping his team finish 15-6. If those sports didn’t keep him busy enough, Eichhorn decided last fall to run cross country for the first time, and he finished third in his graduating class with a 3.86 grade-point average. He’ll continue at Marquette University on scholarship with the men’s golf team, and study business communications.

Coach Jacob Polfus said: “Hunter is the true definition of a workhorse, and he shows that with hard work you can achieve anything. You see so many kids these days talk about working hard, but Hunter is a kid who strives to be the best at everything that he does. Since he has been a little kid, he has spent many hours on the golf course perfecting his game. He is someone that will go to the range after meets, or go play another 18; he is constantly looking to improve his game every day. The biggest improvement that he has made over the years is how he handles himself on the golf course. He has come to realize that you aren’t going to hit the perfect shot all the time, or you aren’t going to have the perfect round, but he keeps his confidence high at all times. It is hard to put into words what Hunter has done for the golf program and for golf in the U.P. He has shown kids today that you can achieve anything that you want if you are willing to work hard and go after your dreams. … Hunter has the same demeanor on the basketball court as he did with his golf game. He was always striving to be his best and get the best out of others. He always gave me his most and a lot extra every single practice and every single day. He is someone that was constantly at the gym wanting to and willing to improve his game every chance that he got. He is one of the hardest workers that I have seen in my eight years of coaching. The biggest thing about Hunter on the basketball court was how much he cared for his teammates. His stats show how good of a season he had, but that doesn’t even begin to tell what kind of player he was. He was always there for his team, leading them through drills and showing them how hard you have to work to be successful. He is a coach’s dream to have on your team, and he exemplified everything that you want as an athlete both on and off the court.”

Performance Point: “It was something that as a freshman or sophomore, I didn’t see that day coming because I don’t look that far ahead,” Eichhorn said of his four golf championships. “It was special, especially to go out the way I did. I couldn’t have honestly dreamed of having a better performance in my last UPs. … It’s unique. In a community like this you know everybody; you have to, there’s only a certain amount of you there. So (becoming the first four-time champ) is a special feeling. I’m honored to be the one to do it.”

Thanks, Grandpa: “When I was younger, basketball always was my first sport. I golfed with my grandpa a couple of times and ended up just loving it. Summers when I was younger, I’d go over there for three or four days and we’d golf in the morning and again in the afternoon, playing as much as we could. That’s where it came from, just from him.”

Getting better, body and mind: “As I got older, I hit the ball farther. But really it was just the mental toughness in golf; that’s what it comes down to. At a certain point it’s just believing in yourself and recovering from the unexpected without getting frustrated.” 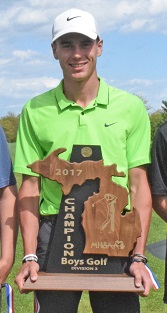 Grind it out: “When I was younger, it was cool to hit a great shot. But I like the part about (golf) now when if you’re struggling or playing good, you just keep grinding it out. Just keep pushing. That’s by far my favorite part, just getting better, because no matter how good you are you can just get better at it. You can play the round of your life, but I guarantee you can look back at a shot or two where you could have been better.”

Hoops crossover: It’s the same as golf; when basketball season rolls around, it’s winter and I don’t play golf as much, obviously, but I love the grind for basketball too – more than I thought I would. With basketball, I joined for something to do, for fun, and I ended up having a deep passion for that one too.”

U.P. power: “It’s just a passion for the game. I enjoy getting out and practicing every day. I know we’re limited (by the weather), but when golf season arrives, it’s what we do, what we dedicate our summer to. That’s why the U.P. has produced good golfers. It’s cool, knowing I’m coming from this area – we have a school with 17 kids in my graduating class – and the U.P. being the U.P. and how small it is, with a limited time to be playing golf. It is a pride thing, to be honest.”

Every week during the 2016-17 school year, Second Half and the Michigan Army National Guard will recognize a “Performance of the Week" from among the MHSAA's 750 member high schools.