Sternburgh, in his 36th season coaching the Redwings, had said his team would be as good as its third through fifth players played in the MHSAA Division 2 boys golf tournament at Bedford Valley Golf Course.

With solid play from all five, St. Johns broke 300 both Friday and Saturday and totaled 597 (298-299) to edge runner-up East Lansing (601) and third-place DeWitt (611). The Redwings came into the postseason ranked No. 3 in LP Division 2, and finished third at the Regional to No. 1 Ada Forest Hills Eastern and No. 2 Grand Rapids Forest Hills Central – which tied for fourth this weekend.

It is the first MHSAA Finals championship in boys golf for St. Johns, which should have everybody back next year as it played four juniors and a sophomore this weekend.

“If you look at the progression we made, I would have said getting here was our goal this year, and then maybe make the top five,” Sternburgh said. “Our top two guys did what they do. I told the guys that what our third, fourth and fifth guys do will make or break our season. They made it for sure.”

Led by Nate Brown, the team’s No. 5 player, those three combined for six rounds of 82 or better, including three that broke 80.

“Brown was just phenomenal,” Sternburgh said. “He shot 79-76, and he’s averaging about 83. He just stayed the course and kept it in play. He came through. Even our No. 4 guy shot 81-82, and his score didn’t count. That’s pretty good when you throw those scores out.”

Brown, a junior, had three birdies Saturday in his 2-over 76.

“I started out rough, but halfway through I just sort of settled in and it all went from there,” Brown said. “On the sixth hole – a par 3 – I hit my tee shot onto the front of the green, and I sank a 40-footer for a birdie, and after that, I think I was even through the next 12 holes.

“I knew we had a chance to win the state title, but it didn’t really sink in until we had the lead on the second day. What I did was unexpected, but I knew what I was capable of; I just hadn’t shown it all year.”

Brown said the key to his success was consistency.

“I probably hit 12 fairways with my driver both days,” he said. “My driver really came in handy, and I made a lot of putts. I had a good feeling coming into this weekend. We all did. I’m living the dream right now.”

The top two were solid as usual. Eric Nunn led the team with 69-70 for a 5-under 139 total, and Zach Rosendale added 71-73 for an even-par 144 total. Nunn lost in a playoff for the individual title with Devin Deogun of Bloomfield Hills Cranbrook Kingswood.

Nunn had a great finish that landed him in a playoff for the individual title.

“I saw him on the course at one point, and he was two down,” Sternburgh said. “Then he said, ‘I’m going to tie this guy.’ After he made the turn, he told me, ‘Coach, I just flipped this guy. I’m two up.’ Then he birdied the last two holes.”

The playoff began on the par-5, 508-yard 16th hole. After a subpar tee shot, Nunn landed his third shot on the fringe of the green, while Deogun was in a bunker just short of the green with his second shot.

“My bunker game is pretty good, so I looked at it like just any other bunker shot,” Deogun said. “I was in the same bunker earlier, so I felt like I had some recollection of what I could do. I was a little bit farther in the bunker, but it was still a similar shot.” 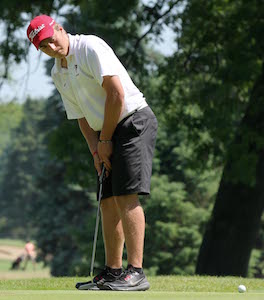 Deogun, who shot 69-70 for a 5-under 139 total, landed his bunker shot about 3 feet from the pin. Nunn three-putted from the fringe for bogey, and Deogun sank his birdie putt for the championship.

“When he missed, I felt I could have just tapped it in there,” said Deogun, a junior who has committed to Michigan State University. “My length is really beneficial for me. I can take advantage of a lot of short par 4s and par 5s, and I’ve worked on my short game a lot with my coach, and it paid off.”

For Nunn, the disappointment of losing in the playoff did nothing to blemish his joy in winning the team title. He had the biggest smile of everyone as they gathered to accept the championship trophy.

“It feels great. I’m so proud of our guys. We’ve worked really hard for this. It’s been a long time coming for Coach Sternburgh, he’s been in it for 36 years, and we’re glad we finally got him one.”

Rosendale, who made the MHSAA Finals as an individual two years ago, is half of the solid one-two punch at the top of the St. Johns lineup. Nunn competed last year as an individual, and the two team leaders shared some advice with their teammates prior to the tournament.

“We’ve been here, so we know how to handle the pressure, and we just told them to drink water and stay hydrated, take deep breaths and just treat this like any other tournament,” Rosendale said. “Our five man came up clutch.”

Juniors Brown and Jack Bouck and sophomore Zeke Ely had never played in the MHSAA Finals prior to this year. It appears the advice was taken.

“We were a little nervous coming in, so we met on the first day and said there is nothing to be nervous about,” Bouck said. “If we played our game, our scores would show it, and after the first tee, I just started playing golf, and we got it done.”

The lack of big-tournament experience for the third through fifth players was a concern to Sternburgh.

“Eric and Zach had played a lot of high-level tournaments, so I wasn’t concerned about him,” he said. “Nate almost couldn’t talk, he was so nervous. I was nursing the last few guys along. You always have to be part counselor. If they made a bad shot, they’re pouting, and you have to lift them back up again.”

Ely, the lone sophomore, shot 81-82 for a 163 total. Although his scores were not needed because of the overall team depth, they provided great insurance in case one of the other players faltered.

“We were fully confident in our abilities, and we knew we had a chance coming in,” he said. “We just needed to put two good scores together.”

Rosendale said he was pleased to be a part of the team that delivered the first Finals championship to Coach Sternburgh.

“I’m really proud of our coach and excited for him, and we finally got him one,” Rosendale said.

Sternburgh, a retired middle school English teacher, said after that next year will be his final year as the St. Johns boys golf coach.

“I’m going to retire with these guys,” he said. “This hasn’t sunk in yet, just the reality of it. It is amazing because this is such an amazing group of young men to be with. They have been with me through some really tough times. I lost my wife two years ago, and they were just great through it all.

“It’s kind of like the cherry on the top, like you are building an ice-cream float. This is the cherry. This is all the years of really, really amazing golfers and young men who have come through the program.

“For me, doing it this long, the wins and losses aren’t as important as the relationships that we have formed. But to get our banner up in the gym, and our names will be up there, and that will be very special.”

PHOTO: (Top) St. Johns' Zeke Ely watches a shot during Saturday's second round at Bedford Valley. (Middle) Eric Nunn putts on the way to helping the Redwings to the Division 2 title. (Click to see more from HighSchoolSportsScene.com.)