And that’s exactly how it will read for a man heading into retirement and his band of departing seniors.

Sternburgh is retiring after 37 years as a coach, and his team sent him out with another title at the MHSAA Lower Peninsula Division 2 Final.

The Redwings repeated as champions Saturday afternoon at The Meadows at Grand Valley State with a two-day team score of 603.

“You just can’t write a script better than this – to go back-to-back,” Sternburgh said. “Getting the first one is hard enough, but to repeat. Granted, we had the same guys back and had a lot going for us, but I couldn’t be any happier or any more satisfied. It just doesn’t get any better. You ride into the sunset with a smile on your face.”

Sternburgh retired from teaching in 2007, but continued coaching.

Senior Eric Nunn said it was “really special” to end both his high school career and his longtime coach’s with another Finals crown.

“The dude loves us more than anything, and he’s been with me and Zach for four years now and he is always telling us how special and talented we are,” Nunn said. “I’m so happy that we could get it for him again.”

Nunn and teammate Zach Rosendale were the catalysts in the victory.

The Michigan State-bound Rosendale wrapped up his banner prep career with an individual Finals championship.

Rosendale shot 72 on the first day and finished at 142. He trailed by three strokes entering the final round, but emerged as the only golfer to go under par.

“I just had the mindset that I’m chasing,” said Rosendale, who recorded four birdies. “I have to play well, because I never know how anyone else is doing. I think they are playing well, so in my head that makes me want to play better.

“I play really well in the wind. I keep my ball low, so I think that was a key factor. Everything was working well. I was hitting the ball well off the tee, and my putting could’ve been better, but lag putting was great. I think keeping the ball low really won me the tournament.”

Sternburgh said Rosendale’s play was indicative of his entire season.

“He’s Mr. Consistent, and he has been all year,” he said. “I think his highest score all year was 75, and his low was 66. He hits everything consistent, and he doesn’t spray the ball. He’s a very solid putter and accurate with hitting greens. There is nobody that has come through St. Johns who is as steady and consistent as Zach has been.”

The Redwings also received stellar scores from others.

St. Johns, which won the program’s first Final a year ago, carded a 298 on the first day to gain a 14-stroke cushion. 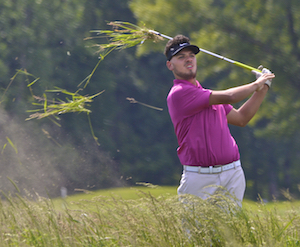 “We worked hard on keeping it in play and played better than I expected, although I wasn’t as surprised about the 298 this year as I was last year,” Sternburgh said. “I was more surprised by the lead. You just don’t get a 14-stroke lead like that.”

The Redwings squeaked out a four-stroke win over East Lansing last season, but this one was less stressful.

“Last year was nerve-wracking because we didn’t know where we stood, and it was so close,” Nunn said. “This year with the live scoring and Coach telling us where we were so we were all pretty calm (today). To go out like this, all four seniors and coach, just means a ton.”

The Redwings drew motivation from a loss at last week’s Regional. They finished runner-up to Flint Powers Catholic on their home course, but reversed the outcome when it mattered most.

“We didn’t play bad as a team (at Regionals), we just didn’t play great and to our full potential,” Rosendale said. “But I’m glad on the big stage, we actually did it. Our team played well, and it’s definitely the best way to go out.”

The Chargers placed ninth last year in Division 3, but moved to Division 2 this spring. A strong final-round score of 310 enabled them to jump from fifth place after the first day to runner-up.

“I was glad to see the wind come up because we play our absolute best golf in the wind,” Flint Powers Catholic coach Robert Beach said. “I know it sounds ridiculous and goes against logic, but I know my team. And when the wind came up, I thought we had a good chance to move up in the standings and they pulled it off.”

“We beat St. Johns last week so our boys knew we had a chance, but St. Johns played lights out,” Beach said. “We played good, they played great. We tip our hat to them, but I’m always thrilled to take home a trophy and put another banner up in the gym.”

PHOTOS: (Top) Grosse Ile’s Jack Tucker and St. Johns’ Zach Rosendale play together during Saturday’s second round of the Lower Peninsula Division 2 Final. (Middle) East Lansing’s Tony Fuentes watches one of his shots out of the brush at The Meadows. (Click to see more from HighSchoolSportsScene.com.)