Suttons Bay finished at 675, while North Muskegon and University Liggett closed at 677.

“It was very similar from nine years ago in many ways, and this is an incredible feeling,” Suttons Bay coach Todd Hursey said. “I’m just so happy for these seniors, and this was a week where I felt like we were coming in as the underdogs. But I knew we had a shot.

“For these guys to stay resilient on a tough course in these kind of conditions was just amazing.”

Suttons Bay shot 334 Friday and trailed North Muskegon by one shot entering the final round, but made up ground by shooting a 341 Saturday.

Suttons Bay’s title run was even more satisfying given it didn’t make it to the MHSAA Finals a year ago after placing fourth at Regionals.

“We didn’t have a lot of experience in the state finals and that was a concern, but a key to this team was they were able to stay relaxed in some real pressure situations,” Hursey said. “It’s a tough sport to keep composure, but watching them for the 36 holes I had a great feeling about the final result because of how they handed it.” 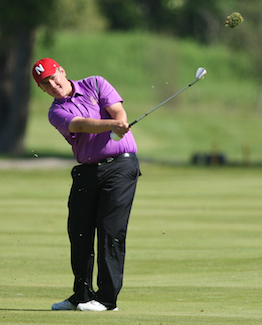 “I’m amazed, and I’m so excited,” Capron said. “We’ve been dreaming of this since we were freshmen, and this was our goal. I think there was less pressure being underdogs coming in, and our team has worked super hard. We hadn’t reached our full potential this year, and it’s very special for the seniors.”

Capron qualified as an individual a year ago and placed fourth. He was much happier to have his join him this time around and wasn’t upset at all about finishing second individually behind Leland’s Joel Sneed.

“I wasn’t playing for myself today, and I didn’t care if I won individually,” he said. “I just wanted my team to do well, and we did and we pulled it off.

“I thought I played really well today and kept my head after shooting 41 on the front, but Joel is a great player. I’ve played with him all year, and he’s in our conference. I love to see him win.”

University Liggett was seeking to win its first MHSAA Final in 33 years, but had to settle for its best finish since its last title.

“They fought hard, but we’re disappointed with the result,” said University Liggett coach Dan Sullivan. “Our scores all year have been much better, but this is a very difficult track and we came up two strokes short. Give credit where credit is due to Suttons Bay. They did the dance.”

“It’s tough for me because I had four seniors out there, and this was our one shot to do it so that’s frustrating,” Sullivan said. “But it is a pretty successful season to finish second in the state. That’s pretty good stuff, but just bittersweet.”

Sneed, a senior, repeated as individual champion after firing an even-par 72 on Saturday. He shot 74 on Friday and finished at 146.

“I played really good golf,” Sneed said. “I was a little stagnant early on and made a couple of good putts, but it was just a good steady round. Nothing spectacular.”

Sneed was in a competitive battle with first-round leader Noah Schneider of Jackson Christian, and Capron.

He created breathing room on his 16th hole, the par-5 first hole.

“I played the par-5s horribly until No. 1,” said Sneed, who will play for the University of Nebraska in the fall. “I hit the best drive of my life probably and had 130 yards in. I hit a 52 degree (wedge) to 12 feet and made eagle. I kind of felt a little separation there, and I three-putted my last hole but it didn’t cost me.”

Sneed trailed Schroeder by two strokes after an opening round 74, but liked his position.

“I was right where I wanted to be,” he said. “I didn’t want to shoot 74, but I found that I’m a little more comfortable playing from behind, especially playing with the leader. The pressure is not on you, and you know exactly where you are. It was a nice setup going into the second day.”

Sneed recorded a pair of birdies to go with his eagle.

“It hasn’t really sunk in that I won, but it’s my swan song going out with a state championship,” he said. “It’s the best way to finish my career.”