HOWELL — Over the years, teams have learned not to blink an eye when facing Bloomfield Hills Brother Rice on the lacrosse field.

It really doesn’t take all that long for the Warriors to make an opponent pay.

Hartland learned that first-hand Saturday during the MHSAA Division 1 Final at Parker Middle School. The Warriors erased a two-goal deficit over the final 21.4 seconds of the first half, then proceeded to outscore the Eagles, 6-0, in the third quarter en route to a 14-9 victory.

“That was huge,” Brother Rice head coach Ajay Chawla said. “We’re down two, and they’ve taken the momentum over. We score two quick ones there at the end. That was a game changer. We went into the locker room and instead of being down two, we’re tied.”

Hartland had rallied from an early 2-0 deficit to grab a 5-3 lead with 1:15 left in the first half. Five Eagles scored, capped off with a goal by senior Charlie Anderson, who took a pass from freshman Drew Lockwood and scored to give his team its biggest lead of the game.

Brother Rice wasted little time answering. Sophomore Ben Eck scored the first of his two goals, battling his way through the Eagles’ defense to put one upstairs and cut the lead to 5-4. After gaining possession of the ensuing faceoff, Chawla called a timeout to set up one last play before halftime.

“We were talking (during the timeout),” said Warriors senior Luke Dudley. “I wasn’t really beating my guy to the net in the first half, but I was getting my hands free. I knew I had (Josh Schlackman) off the pick, hit him, bang.”

The goal certainly changed the momentum in favor of Brother Rice.

“We fell asleep a little bit, and there were a couple of plays that we needed to be dialed in on to end the quarter. That happens,” Hartland head coach Nick Levanti said. “They’re a good team, and if you give them opportunities to score, they’re gonna. We gave up some easy ones there.”

Brother Rice dominated the third quarter. Sophomore Sam Klein scored seven seconds into the second half, and Dudley scored three of his game-high four goals in the third. 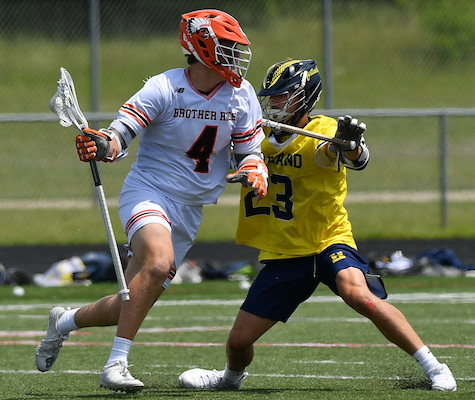 “We were obviously a little worried at first, going down, it was a bit of a surprise,” Dudley said. “But we’ve got guys out here who can step up and score. The offense got together. The defense got together. And we talked things out and knew what we had to do. We came out, got some gritty goals.”

Hartland scored the first goal of the fourth quarter, snapping an eight-goal streak by the Warriors. Junior Ryan Krause took a pass from junior Bo Lockwood to make it an 11-6 game. But Brother Rice would answer with a pair of goals from Dudley to push the lead back to seven.

“If you want to play good lacrosse, state championship lacrosse, there’s a margin for almost no error against any team,” Levanti said. “Especially Brother Rice.”

It was the second-consecutive Division 1 championship for the Warriors, who have now won 15 of the 16 MHSAA Division 1 titles handed out.

“At halftime, we reminded them of what they can do,” said Chawla, whose team finished the season 18-2. “They've never lacked heart and hustle and energy this year. What we have lacked sometimes is a little execution. We just weren’t executing. And we started to execute there in the second half. You saw what kind of team we can be when we execute.”

Senior Noah Luck led the Eagles with three goals. Bo Lockwood finished with a pair of goals and four assists. Drew Lockwood (two goals), Krause and Anderson rounded out the scoring for Hartland (22-2), which lost only to Brother Rice (twice) this season.

The Eagles are a young team, and Levanti said he’s excited about the future.

“We had a lot of young guys who stepped up and helped us throughout the year,” Levanti said. “We learned a lot about ourselves, about how tough we really are. It’s incredible, the amount of work ethic these kids have. We have a lot of sophomores, a lot of freshmen. I think there’s a really bright future for this program.”