BIRMINGHAM – Bloomfield Hills Brother Rice remains the only Division 1 boys lacrosse champion in MHSAA history. But not without having to withstand pesky Ann Arbor Pioneer in Saturday’s Final at Seaholm High.

The Pioneers hadn’t lost a game this season and jumped out to a 2-1 lead. But after breaking the game open in the second quarter, Brother Rice hung on for a 14-8 victory to continue a title streak that has included every MHSAA championship since it became an association sport in 2005.

“The most important thing is we’ve got to play our game,” Brother Rice coach Robert Ambrose said. “We weren’t doing that. We weren’t executing like we should, playing a little selfish or (not) moving the ball. So we just said, ‘Hey guys, we’ve got to regroup. We’ve gotta go after it. We’ve got to get into our zone, and play our game.’” 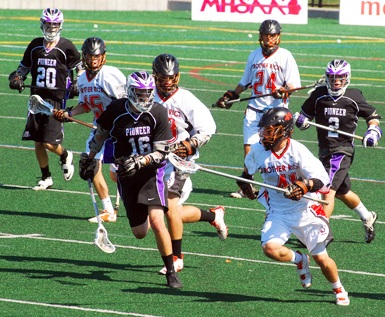 al tied the score 2-2 just more than a minute into the second quarter.

But despite outscoring the Warriors (20-2) by two goals during the second half, Pioneer could never make up for the early barrage.

“The second quarter, we just got shell-shocked. We went from being up 2-1, and then all of a sudden it’s 11-3. … We just sorta got overwhelmed from where we were,” Pioneer coach James Corey said. “And we battled. For three quarters we hung with this team, and I think we have a lot of talent, a lot of heart.

"But they’re the best team for a reason, and they showed it in the second quarter.”