TROY — Johnny Wagner had a once-in-a-lifetime moment three days earlier, but may have topped it on Saturday.

With another overtime looming, Wagner lived out yet another dream scenario by scoring the championship-winning goal with 10.5 seconds left in regulation, giving the Cranes a 10-9 victory over Okemos at Troy Athens.

Wagner's fifth goal of the game broke a 9-9 tie that Okemos achieved with a late three-goal outburst, capped by Charlie Ciuk's tally with 1:20 remaining. The Cranes led 8-4 with 7:45 left in the game.

"It was a similar play the last game in overtime," said Wagner, who had a hat trick when the Cranes won the 2013 championship. "It's something we've been working on. It's been an exciting week. It's a big one."

Cranbrook Kingswood got possession following Ciuk's goal and called timeout with 53.5 seconds remaining. Wagner held the ball coming out of the timeout before breaking toward the net and burying a shot into the upper-right corner.

It was the biggest goal of his career — or at least in the last three days. And he will have to watch the video to see it for the first time.

"I did not see it go in," Wagner said. "I thought the goalie saved it and everyone started jumping all over me. I got hit. I was shooting off my back foot. I'm not complaining."

There was never a doubt which player would take the final shot for the Cranes.

"That is exactly what we expect out of him," Cranes coach Mat Wilson said. "That play at the end was just to get the ball to your best player and let him do his thing." 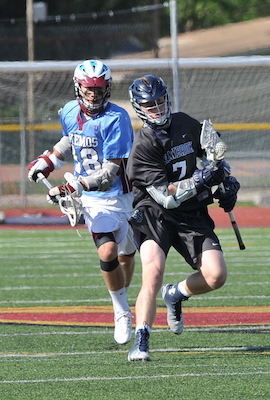 Okemos won the ensuing faceoff and called timeout with 7.3 seconds on the clock. Cole Jamieson, who had two goals, ran with the ball from midfield and fired wide to the left of goalie Ryan Rosenthal from 10 yards out.

"It went wide," said Rosenthal, a 5-foot-5 senior who started in the last three Division 2 Finals. "Me and Trey (Greissing) ran to the end line to get that possession. At that point, we knew we had it."

Although Okemos was able to come back from four goals down to tie it, Rosenthal made two big saves from close range in the third quarter when the Chieftains were rallying from a 5-2 halftime deficit.

"I think he was the player of the game," Wilson said. "I'm not sure what his stats are, but he is an incredible leader. He kept us in the game. Without him, this might have turned out differently."

It appeared that the Cranes had safely secured their third MHSAA championship when the second of Wagner's four fourth-quarter goals gave them an 8-4 lead with 7:45 remaining in the game. But that goal was part of a wild scoring spree by both teams that produced six goals in 2 minutes and 19 seconds. Blake Grewal Turner's second goal with 5:26 remaining got Okemos within 9-8.

The scoring subsided for a few minutes until Ciuk took a pass from Monty Frankfort and went to the net for the tying goal with 1:20 to go.

"We were up a little bit, but knew this team could score," Wagner said. "They're a big offensive threat, so we knew it wasn't over. They got it to 9-9. I was on my tiptoes; I think the whole team was. To score and put the game away is unbelievable."

In the end, perhaps it was big-game experience that carried the Cranes. They were playing in their third straight Final, while Okemos was in the title game for the first time.

"We knew we weren't playing the way we usually play," Grewal Turner said. "I think we came out a little timid. We realized once we started pushing, they didn't stand a chance. We started pushing too late and it showed; we lost by one."

Grewal Turner opened the scoring with 10:53 left in the first quarter to give Okemos its only lead. Riley Matthews scored the first two of his three goals just 1:15 apart to give the Cranes a 2-1 lead before Bennett Sherman's tally with 1:42 left created a 2-2 tie after one quarter.

Charlie Pistner, Wagner and Greg Aikens of Cranbrook Kingswood scored the only goals of the second quarter, as the Cranes took a 5-2 lead into halftime.

Jamieson and Sherman scored back-to-back goals to get Okemos within 5-4 with 3:36 left in the third quarter. Matthews collected his third goal to end the third-quarter scoring, and Wagner scored the first two goals of the fourth to give the Cranes their 8-4 lead.