By John Raffel
Special to Second Half

BOYNE FALLS – Marquette is back as MHSAA Division I Boys Skiing champions after the Upper Peninsula school ended competition Monday with a combined score of 57 points to finish ahead of defending champion Clarkston’s 74 at Boyne Mountain.

The championship was the Redmen’s first since 2009 and eighth since skiing became an MHSAA-sponsored sport in 1975.

Marquette had a score of 34 in the slalom to match 2012 champion Clarkston. But Marquette was superior with a 23 in the giant slalom compared to 40 for Clarkston.

“I was proud of the boys,” said Marquette coach Marty Paulsen, who finished his third season running the program. “We scored well as a team. They all skied as a team and all knew what had to be done.

“It marks a pretty long tradition of skiing excellence and top skiing performances in the state,” he added. “It's great to be a part of that tradition.”

Traverse City Central was third among teams at 95 points, Traverse City West fourth at 127 and Lake Orion fifth at 143. Okemos took sixth at 237 followed by South Lyon at 240, Grand Blanc at 271 and Brighton at 279. 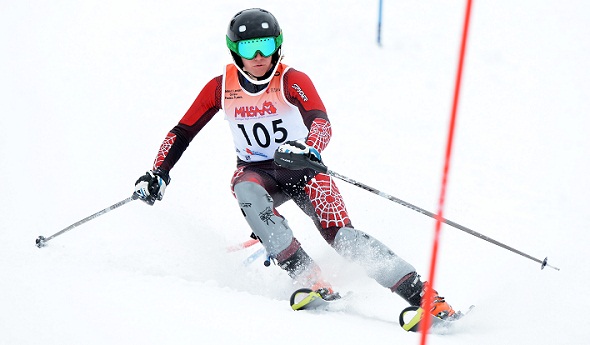 Janssen's family has a place in the area and he considers Boyne as his home hill.

“I grew up on this hill so it's kind of nice to win it my senior year,” he said. “I was really happy with my results. It's my senior year and I'm trying to get it done. The results speak for themselves. I had a really good day and I was happy.”

Fifth in the slalom was Janssen's previous best finish at an MHSAA Final.

“I knew I was going to ski well today,” he added. “I took kind of a conservative first run and had not my best run. I kind of got angry after my first run and was in seventh. I went into my second run saying 'it's do or die here. I went in with complete confidence that whatever I do on this run will be my high school legacy. I went after it and it all worked out.”

“Last year, I was going in and one of my skis popped off, and I was sitting second after the first round, Clark said. “I changed bindings in skis, and I matured a little more so I knew what I was doing a little bit more.”