So Mother Nature did its best Monday at the MHSAA Division 1 Finals.

However, not even unseasonable conditions slowed down the Redmen.

For the sixth straight year, Marquette finished the season as a champion in boys skiing following another dominant performance on a warm day at Boyne Mountain that wreaked havoc on a field not used to such mild and slushy conditions for a Finals meet.

Marquette finished with 56 points to once again best Traverse City Central, which was the runner-up for the fifth straight year with 80.5 points.

Marquette coach Dan Menze said conditions were firm for the morning runs, but he had to tell his team to use caution when the warmth and sun softened the courses up considerably in the afternoon.

“Definitely in the afternoon, I had to let them know to be soft on their edges,” Menze said. “No hard pressures because as soon as you do in the soft stuff it’s going to eat you up. But they’ve had the opportunity the last couple of weeks in training to see different snow types, so they were a little used to it.” 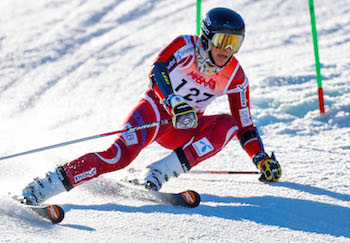 Marquette started the day by dominating the morning slalom run, taking the top three places in that event.

Marquette wasn’t quite as dominant in the giant slalom when the afternoon arrived, but it was still good enough to score plenty of points.

Of the bunch, the only senior is Thomas, and he leaves with MHSAA team titles for every year of his high school career.

“It was surreal when we won the first one,” Thomas said. “Before you know it, I’m already a senior. I just got really lucky to be on teams that had awesome skiers every year.”

PHOTOS: (Top) Marquette's Aaron Grzelak races toward a first-place finish in slalom Monday. (Middle) Rockford's Nick Rupert cuts through a turn during the giant slalom. (Click for more from HighSchoolSportsScene.com.)