HARBOR SPRINGS – A first for Cadillac, and more of the same for Petoskey.

Keenan Cooper became the first male skier in Cadillac history to sweep the MHSAA individual ski titles Monday when he accomplished the feat at the Division 2 Final at Nub’s Nob.

Petoskey, led by double-medalist Gunnar Lundteigen, ran away with the team championship, its fourth consecutive and 15th in the storied history of the program.

“The team’s been really solid in the past, obviously, and being a part of it really feels good,” said first-year Petoskey coach Erik Lundteigen.

“Watching this senior class, they haven’t lost a conference, a Regional or a state Finals in four years, which is unbelievable.”

Almost as unbelievable was the performance of Cooper, who edged Andrew Schumacher of Grand Rapids Christian to win the slalom, and beat out Robbie Cort of Birmingham Brother Rice to capture the giant slalom.

“I woke up feeling good today, and it was just an on day for me,” said Cooper, a senior whose previous best Finals finish was a fourth in slalom last season. “I took that first run today and it just felt smooth. From that point on I could let it all out today. 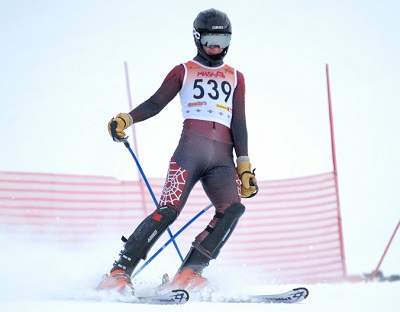 “I knew I had a chance at it, but I knew I had to ski really well because there’s a lot of good skiers here. Just had to ski my own race and not really think about what other people were doing. Just go out there and do what I could do.”

Familiarity with the steep and tricky terrain at Nub’s helped, said Cooper, who estimated he had competed on the hill at least five times in his career.

“Scarface is just a brutal hill no matter what course is set on it because you’re doing every type of turn you can throw in there, fall-aways, bank turns, and it just becomes a tough course,” he said. “You kind of take all the tools you’ve learned over the years and you apply it to one course.

“I’m decently familiar with it. Makes a huge difference.”

Gunnar Lundteigen was in Cooper’s ski boots a year ago, when he swept the individual titles at Marquette Mountain.

He failed to repeat, but brought home medals in the slalom (third place) and GS (fourth) as Petoskey dominated the team competition. The Northmen finished with 41.5 points, a whopping 62 better than runner-up Cadillac.

By the time the afternoon giant slalom started, all Petoskey had to do was get four skiers to the finish line.

“Everybody skied up to their potential,” coach Lundteigen said. “They’re all good skiers, they’ve trained hard all year, they’ve worked hard all year. We had one of our best days today.

“There’s a lot of depth. If one guy makes a mistake or goes down, the rest of the guys pick him up.”

While Gunnar Lundteigen recorded Petoskey’s lone top-10 finish in the GS, the Northmen had four other skiers finish from 11th-16th.

Joining Cooper and Gunnar Lundteigen as double medalists were Schumacher, Nate Houk of Cadillac and Ben Hicks of Bellaire.