The Petoskey senior saw that through to its conclusion Monday, leading the Northmen to the school's eighth consecutive Division 2 crown at Schuss Mountain.

The streak matches Traverse City Central's from 1988-95 as the longest in state skiing history.

"There's been a lot of energy all season," said Siegwart, who placed second in giant slalom and fourth in slalom to earn his fourth and fifth first-team all-state finishes. "Coach always tells us it's hard to win it, and once you do, it's ever harder to keep winning it. It's never been easy. To keep up that record has been a goal since we were in middle school."

Petoskey led Great North Alpine — a cooperative program of Traverse City St. Francis, Elk Rapids, Central Lake and Grand Traverse Academy — by 16 points after the morning's giant slalom. The Northmen typically specialize in the slalom, but a few bobbles and some great GNA times saw the lead advance only 7.5 points.

Siegwart said a friendly rivalry with Great North Alpine — which finished second for the third consecutive year — has been a good thing for everyone involved.

"We were watching them, for sure," Siegwart said. "I'm pretty good friends with all the guys over there. We're always egging each other on. Last night and this morning, we were texting each other to make sure we were on our toes. Just a lot of trash talk going back and forth, which is healthy. It pushed everyone."

"Just a little bit different," White said. "Theirs is gold, ours is silver.

"Naturally, do you want to walk away with first place? But second-place isn’t that bad. To beat Petoskey, you can’t make a mistake."

GNA's Finn Husband won the slalom, and was the only entrant to finish two runs in under a combined one minute.

"Petoskey is a juggernaut, for sure," Husband said. "What is it, eight years now? They're deep and have a lot of guys who can put down a good run. It's really difficult for other teams to sneak in there. We're a young team this year, so hopefully we can take it next year. Eight is enough for them. We need one." 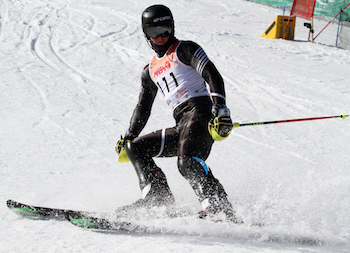 Husband had the second-best time on his first slalom run, and shaved almost 0.8 seconds off that the second time around.

"His first run in slalom, he came down and had a really clean run," White said. "He was sitting in second at that time, back by just a couple hundredths of a second. He came down that second time, and you just had to hold your breath a couple times. It looks like he was going to come out, but he’s very athletic and held it in the course. He pushed that to the limit."

"The snow was a little iffy for me, running in the second seed, but I felt like I was able to take control of it and just feel it through," Husband said. "Speed-wise, on the second run, I just kind of sent it and really hoped for the best. Obviously, it worked. I almost blew out a couple times. Just had to hold it."

Cadillac's Alex Netzley trailed Flint Powers' Devin Hope and Husband after the GS' first runs, but posting the best time the second time down the hill leapfrogged him into first as he won the race for the second straight year.

"My first run wasn't great," Netzley said. "I skied a little conservatively. I knew that second run I just had to attack and lay down a good run."

"I just wanted to go out and lay down four good runs," Netzley said. "I was happy. I just skied solid in both events."

William Thomas' 10th-place finish in GS made him the only D2 racer with a top-10 finish out of the fifth or sixth flight. He also took seventh in slalom.

"Location for us is huge," Siegwart said. "We have Nubs (Nob) and Boyne (Highlands) right there on our backdoor, so it's easy to get good, free skiing in."

Northmen coach Erik Lundteigen wouldn't even rule out winning a ninth title in a row next year.

"We'll be pretty strong," Lundteigen said. "We'll be losing some great seniors, but we always do. The key to the program is building it up. We've got underclassmen that learned this year, and they'll step into that role next year. I'm optimistic."

PHOTOS: (Top) Petoskey’s Ethan Siegwart sends up a spray of snow during one of his runs Monday. (Middle) Finn Husband was the slalom champion, representing Great Northern Alpine. (Photos by James Cook.)