TRAVERSE CITY – With the sun shining, and the mercury inching into the 40s, Carlee McCardel was enjoying what felt like a spring day of skiing Dec. 20 on the two slopes that were open at Crystal Mountain Resort in Thompsonville.

Except this was late December, just days before Christmas.

Above average temperatures, coupled with rain, put ski resort operators throughout the state in a bind as they tried to open their facilities before the holidays. A handful of resorts in the northern Lower Peninsula opened a limited number of slopes last week, although the weather continued to be a problem.

"I don't remember many Decembers where it's been this warm for this long and with so few opportunities to even make snow," said Ben Ferris, co-coach of the Traverse City St. Francis, Elk Rapids, Central Lake and Grand Traverse Academy co-op ski team.

That's why McCardel, a St. Francis senior and two-time MHSAA individual champion, was grateful just to be on snow, even though the slopes were surrounded by green grass.

Most teams had yet to conduct a practice on snow as of Tuesday. Traverse City West coach Ed Johnson was hoping to take his squad to Boyne Mountain on Wednesday, weather permitting.

Instead, skiers have had to embrace dryland training – weight lifting, running and plyometric exercises – to keep physically fit. Still, it does not replace practicing on a pair of skis.

"You can get all the conditioning you want," Johnson said, "but they're (skiers) not going to have the timing, and all the other skill development that they need to race and be productive and successful at it. We desperately need some snow time."

The first invitational of the season, the Harbor Springs-Petoskey Invitational, has already been canceled. It was scheduled for Jan. 6.

With snow not available, coaches are doing the next best thing – simulating.

The co-op team, which meets at Mt. Holiday, sprints down a slalom course on the hill, focusing on body posture, running the right line through the gates, and planting the outside foot correctly.

"We want them to envision what it's like once they get on the snow," Ferris said.

Now, some skiers have been on snow. Johnson, his son Austin and daughter Morgan led a group on a ski trip to Austria over Thanksgiving. The group included six skiers from West, plus a few from Traverse City Central.

Once the season starts, McCardel and Hicks will be two of the top skiers to watch. McCardel won the girls Division 2 giant slalom as a freshman and sophomore. She was edged by Houghton's Jenna Stein (53.04 to 53.31) last February.

"I couldn't have asked for a better high school career," the 18-year-old said. "I've achieved more than I ever wished I could. It's humbled me."

McCardel said she was not too upset placing second to Stein last season because she felt she gave it her best. 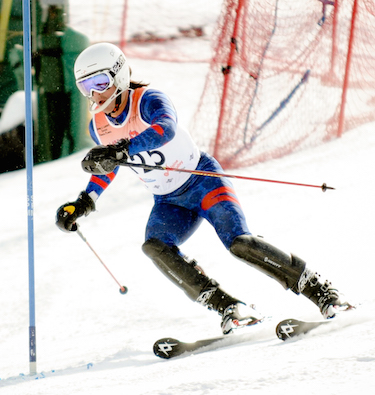 "I left it all on the hill," she said. "I was happy with how I skied. Jenna happened to ski faster that day. I was happy for her."

To prep for this season, McCardel has spent considerable time in the gym.

"She's put in a lot of time in the offseason, working on her leg strength, her core strength, to make sure her body is ready," Ferris said.

She's also been watching World Cup ski action on TV to visually "get into it."

The girls co-op team finished third at the MHSAA Final last season and returns the nucleus of that squad with McCardel and Sarah Trilla at the top of the lineup.

"We only lost one girl (to graduation) and we gained a fast freshman (Claire Kalajian)," Ferris said.

Hicks headlines the boys team. He's coming off an impressive football season, capturing first-team all-Ski Valley honors on both sides of the ball, even though he suffered a groin injury the first game of the year.

"Every week I would take it light in practice, not run that hard, and then play Friday," he said.

He still finished with 1,088 yards rushing and 17 touchdowns. He also had nearly 400 yards receiving with three touchdowns and returned a kick for another score.

"He's just now getting back to 100 percent," Ferris said. "That kid is so focused. He's such a good athlete and he's so coachable. He works hard all the time."

Hicks, who turns 18 next month, said he feels fine now.

"I’ve had a long opportunity to test it, ice it and gently stretch it," he said. "It feels almost back to normal."

Hicks edged his friend, Petoskey's Mitch Makela, to win the giant slalom a year ago (52.30 to 52.52). Makela also attended the camp at Copper Mountain over Thanksgiving.

"It's a lot more technical," he said. "And I've always been better at it."

Meanwhile, Johnson expects to have another strong girls team at West. The Titans are the defending Division 1 champions. West lost Morgan Culp to graduation, but returns plenty of experience with Kitt Hornbogen and Claire Podges leading the way.

Now all that’s needed is snow.