LINCOLN – When it comes to the MHSAA record books, Conner McCoy is the real McCoy.

The Lincoln Alcona senior keeper, who previously set the state soccer record for saves in a season, added to his laurels Wednesday night, becoming the state and national leader in career saves.

McCoy stopped eight shots in a 2-0 win over Oscoda to increase his career saves total to 1,191 – six more than Corky Hickmott, who played at Montrose from 2004-07. Hickmott was in attendance to see McCoy eclipse his mark Wednesday night.

“I was super psyched about getting it,” McCoy said afterwards. “I thanked my team so much. Plus, I knew my mom was watching down on me. It was exciting.”

Wednesday’s game was stopped in the second half when McCoy broke the record. The game ball was saved and will later be inscribed with the date he set the record along with his final number of career saves.

“We’re a small Division 4 school,” Tigers coach Tim Munro said. “Something like this may never happen here again. He’s setting a record that’s going to be tough to beat because we’ve got several more games to play. He’s going to annihilate it.”

It was a big night in this small town. Playing before the largest soccer crowd in school history – Munro estimated it at about 1,000 – Lincoln Alcona clinched at least a share of the North Star championship with its shutout victory. That feat, however, was overshadowed by the historical significance of the moment.

And McCoy and his teammates did not disappoint.

“He was really nervous,” Munro said of McCoy. “I’m glad it’s over for him. He played well, getting the shutout, but there wasn’t a whole lot of pressure (shots) on him. Our defense was really good.”

McCoy was quick to praise his teammates afterwards.

“The first thing I did was to thank my team,” the 17-year-old captain said. “I couldn’t do anything without them. They’ve given me so much support throughout this. They were so excited I got it. I think there were a few tears (shed). We’re like family. When we got together that first day (of practice), we knew there was a real connection between all of us.” 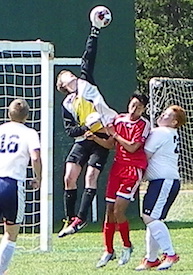 One of his closest friends is senior forward Jordan Steiner, who netted both goals Wednesday to bring his season total to 40. He had 47 a year ago.

“I’ve been playing (soccer) with Conner since I was 5,” Steiner said. “To see him go through this, and achieve this, is crazy. Kudos to him. He earned it. He worked hard for it. He’s like a stone wall at the net.”

Steiner said the Tigers were “careful” not to talk too much about McCoy’s chase for the record because they didn’t want to add more pressure on their goalie. Instead, as the record neared, they focused more on the team angle.

“We approached it like, ‘Hey, this is just another game. Let’s do our best and try to get a win,’” Steiner said.

McCoy was unaware Hickmott was among those watching. Had he known, McCoy said he probably would have been even more nervous.

McCoy reached out to Hickmott recently. Hickmott made the trip to West Branch Ogemaw Heights on Monday when it appeared the record could fall that night. McCoy made 18 saves in a 3-2 setback, leaving him three short of the record.

“It was amazing (Hickmott) drove all the way here after going to Ogemaw Heights,” Munro said. “He’s a nice guy. He didn’t want to, but I said, ‘C’mon you’ve got to be on television.’ He was interviewed after the game, too. It was really neat.”

McCoy set the MHSAA single-season save record with 391 as a sophomore. That lasted one year as the athletic 6-foot-2 goalie turned away 401 shots in his junior campaign.

Then, right as he was finishing his basketball season in March, his mother, Sheryl, passed away from amyotrophic lateral sclerosis (ALS) at the age of 50. Sheryl coached youth soccer for 14 years.

“She always loved soccer, and she loved to coach,” McCoy said. “She pushed everyone to be the best they could be. She could see the potential in everyone.”

McCoy said he can still feel her presence.

“Before every game I say a prayer and look up to God,” he said. “I know she’s watching.”

“I’m nervous for him and excited at the same time,” Tim said Monday on the drive home from West Branch. “If that was me out there I’d be a nervous wreck. I don’t think I’d be able to do it.”

That’s not to say Conner didn’t experience a few butterflies this week. 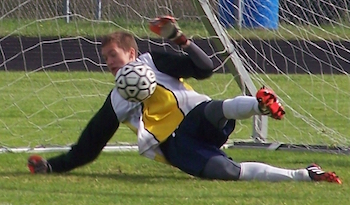 “I think (Monday) was the first time I’ve ever seen him nervous, all because he was getting close to the record,” Tim McCoy said. “Normally when he’s out there, no matter what team they’re facing, he plays like he’s in a comfort zone. He’s solid.”

So what fatherly advice did he offer?

“I told him to play his game, not worry about the count, and focus on every shot,” Tim said. “He wants his team to win more than he wants the record.”

“He likes to win. That’s the driving force,” Munro added.

It was a coincidence the record fell in a league showdown with Oscoda. Tim works at a call center there that deals with government contracts. He said his co-workers are well versed on Lincoln Alcona soccer and his son’s accomplishments.

“I don’t think there’s a single person at work who doesn’t know about (the record),” he said proudly. “I tell everybody.”

“We’re a small school,” he said. “We only have 200 kids to pick from and we play a lot of bigger schools in Divisions 1, 2 and 3. That makes a big difference. That’s one of the reasons why there are so many shots at (McCoy).”

Also, the Tigers, who face Gaylord on Saturday, play the maximum number of games in the regular season and are two-time District champions.

“We lost to Genesee Christian the last two years in Regionals and they went on to win the state championship,” Munro said.

So now that the record is behind him, what’s next for McCoy and his teammates?

Here’s a clue: It’s not about saves, it’s about wins.

“We’re hoping for a (District) three-peat,” he said.

PHOTOS: (Top) Lincoln Alcona's Conner McCoy goes high to stop a header for one of his saves. (Middle) McCoy stretches out to deflect the ball away from his goal. (Below) McCoy slides to the ground to gather up another save toward his national record. (Photos courtesy of the McCoy family.)

VIDEO: WBKB shows McCoy's three saves to break the national record and interviews him after.