The object of the chant was senior Anthony Bowie, who scored the first goal of the game as Forest Hills Central captured its first MHSAA championship since winning the Division 2 title in 2004 with a 2-0 victory over defending Division 1 champion Canton.

Bowie did not seem too concerned about the chant or the upcoming announcement of the award.

“I tried not to pay attention to that,” he said. “I was just focused on the team.”

Bowie tied the school record for goals in a season with number 42 in the seventh minute of the game on an assist from Max Postlewait. Bowie was right in front of the goal when he booted it past the goalkeeper.

“Max put a ball over the top, and it was falling down and I was all by myself, and I was just looking to frame it one time, and I put it on frame,” he said.

It was a key goal. The previous four Division 1 championship games ended 1-0, so goals are sometimes at a premium.

“It was huge,” Forest Hills Central coach Blair Lincoln said. “We talked about not chasing the match and getting out in front and having them react and chase us.

Canton coach Mark Zemanski had to look only one game back for hope facing a 1-0 deficit. 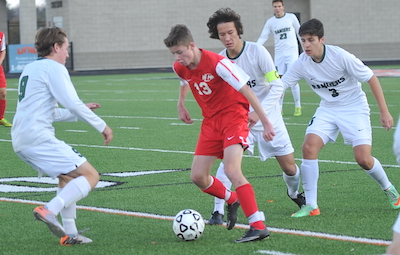 “They were a very good team. Bowie was the best forward we’ve faced all year by far. He was good.”

Bowie, who is headed to Western Michigan University, also assisted on Forest Hills Central’s second goal of the game, and Lincoln said that part of his game is often overlooked.

“Anthony is a special player,” Lincoln said. “He had 42 goals this year, but what is even more impressive is his ability to generate almost 25 assists. He was a part of almost 70 goals this year.

“He’s very dynamic and one of the best players I’ve ever coached.”

With the 1-0 lead, the Rangers became a little more defensive-orientated and relied on sophomore goalkeeper Jared Ireland and the unit that has become known as “Clamp Nation.”

“It’s fantastic,” Ireland said. “I have to give a good round of applause to my defense. They stayed tight throughout the game. There were a couple of good chances, but we pulled through at the end and clamped it down for Clamp Nation.”

Ireland faced his greatest challenge with four minutes left in the second half. He had to dive to his right to stop the ball from hitting the back of the net and tying the game.

“It was a very high-reaction save and very difficult,” Ireland said. “I was very nervous in the last 10 minutes of the game. Those last 10 minutes seemed like they lasted as long as the whole season.”

A few minutes later, junior Mohamed Haji scored with an assist from Bowie, and the Rangers had a 2-0 lead with just a few minutes to play.

“Our goal was not to be content getting here,” Lincoln said. “You’re playing the defending state champs and a very good squad, and they fought hard all the way to the end.”

Three years ago, this probably did not seem possible for the Rangers, who won just five games in 2012, the first season under Lincoln.

“Our first year, we had a young team, and we all grew together,” Bowie said. “We had a core group of guys throughout the whole time, and we just grew up together. We just stayed together.

“There were three of us as freshman, then seven as sophomores and then 12 as juniors. It feels awesome, and hopefully these guys carry it on for the next few years and learn from the seniors.”

Zemanski was obviously disappointed that Canton did not become the first team to repeat as Division 1 champion since East Kentwood in 2007-08 but pointed out that his team lost to another good team.

“The boys knew they had their backs to the wall,” he said. “They knew this team wasn’t going to give up, and they had to work together to generate some opportunities, and we generated some but couldn’t find the back of the net. Hats off to them. That’s a very good team.”

The Rangers, who started the season with dreams of an undefeated season and an MHSAA championship, had three ties, and Bowie pointed out that one of them might have served as a springboard into the playoffs.

“The last game of the regular season (against East Grand Rapids), we were up 3-0, and in 10 minutes they scored to make it 3-3,” Bowie said. “It was a reality check, like they can beat us, and that’s when we really came together and said we have to stay focused, and we were able to do that throughout the playoffs.”