But for Bill Anderson, a registered assignor who schedules officials out of the Cadillac area, there has been Little.

Alexus Little that is. And he’s darn glad he’s had her for 15 to 20 games each boys fall and girls spring seasons the past four years.

“I think her greatest asset is a natural ability to stay calm and see the entire field,” Anderson said.  “She has repeatedly demonstrated an ability to take a moment and see how things play out before blowing the whistle or raising the flag.

“It has been a pleasure to work with Lexi from the beginning and watch her develop, and gain confidence in her ability.”

Little, a former four-year player at Cadillac High School who graduated in 2017, loves officiating the game she has played since she was an 8-year- old.  She started officiating with the Michigan State Youth Soccer Association. Anderson assigned her those matches as well.

“It is the most fun job I’ve ever had, and it is super convenient for varying schedules,” she said. “You get to learn more about the game of soccer, watch plenty of games, stay active, and meet a ton of referees that share the love of the game and may have even officiated your own games.”

Little, a big challenge for high school defenses as a striker, sees herself in almost every girls soccer player she refs.

“When I played I was a center striker so my playing style was pretty scrappy and aggressive, yet still heavily based on footwork and constant runs with my teammates,” she said. “I see players like me all the time during the girls season.” 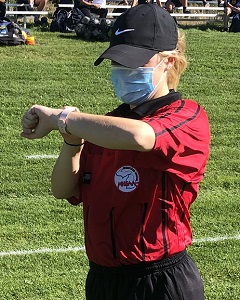 “She was a no-nonsense, hold-her-ground type of player who wasn't afraid to play with her back to goal and challenge defenders to come get her,” Anderson recalled.  “More than once I blew the whistle and received a little dirty look from her, because she felt she could have kept going despite being fouled.”

As a senior, Little earned Division 2 all-state honorable mention. She now attends the University of Michigan. COVID-19 is allowing her to stay home, go to school and earn money refereeing fall soccer. She also refereed in the Ann Arbor area during her freshman year of college.

“I love to stay involved with soccer,” she said. “I’ve been doing it since middle school, and it's a fun and active way to earn some money.

“Being a referee also allows me to pick up games that fit my schedule.”

Little is among a just a handful of female soccer referees in the northern Lower Peninsula, that group also including Grand Traverse Area Soccer Association members Josephine Arrowood and Amanda Field.

“It can be a bit intimidating at times,” she said.  “Most referees are men, so I feel like I lack authority in the eyes of the players/coaches/parents as a young woman, and even more so during boys games where most of the players are much taller than me.

“But, there have been several instances where I have received compliments from coaches or spectators passing by after a game related to being a young female officiating because they claim to not see that very often and would like to see more of it.”

“When doing a boys game, I think there is still a general tendency to see if the female is up to the challenge,” he said. “However, she doesn't let that bother her and it doesn't take long for others to realize she is more than capable.”

Little gets a lot of satisfaction out of the game of soccer and recommends others get involved in officiating.

“The types of games where I am very glad I’m a referee are the ones where I get to watch crazy talent and skill from players I never would have seen play otherwise,” she noted.

PHOTOS: (Top) Alexus Miller inspects the nets with officiating partner Jeremy Barrett before a game this season. (Middle) Miller checks her watch during a break in the action. (Photos courtesy of Tom Spencer.)