COMSTOCK PARK – All season long, the Leland boys soccer team has been an offensive force.

Heading into Saturday's MHSAA Division 4 title game at Comstock Park High School, the Comets had scored 158 goals over 27 games, and out-scored their opponents by 139.

But against reigning champion Ann Arbor Greenhills, Leland needed to show off some solid defense – and play under a little more pressure.

The Comets did just that, winning the program's first MHSAA Finals boys soccer title with a hard-fought 1-0 victory over Ann Arbor Greenhills.

"We had a few teams in the past that we thought may make a run, but nothing compared to this group.," said Leland coach Joe Burda, whose team ended the year with a 24-1-3 record. "We have soccer players everywhere, and these guys wanted this so bad ever since July. As a coaching staff we are so proud of them. They set their goal, and they did it."

The did just that by controlling tempo with solid defense, passing and an offensive attack that was quieted Saturday but showed Gryphons coach Lucian Popescu why his team was facing Leland in its return to the championship match.

"They pushed harder, especially 10 minutes after the game started," said Popescu, whose team ended with an 11-9-3 record. "I thought there were times we were able to match them, but the tempo was higher on their end."

Leland scored the only goal six minutes and 54 seconds into the first half, when junior midfielder Jesus Calderon-Balcazar sent through a nice unassisted one-touch finish.

The Comets had several chances after that, most coming off the explosive play of senior captain and forward Cobe Lund. But they were held out of net the rest of the way. 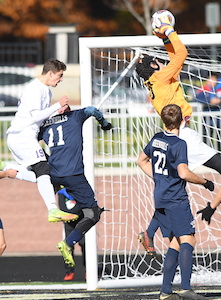 "We were only one goal up, but that is all you need to win the game," said Lund, who ended his impressive senior season with 42 goals and 18 assists. "It is scary being up only one goal, but we held on and we got the win."

And got that win in front of a good majority of the town of Leland, which made the trip south to cheer on the Comets.

"This was the goal ever since boot camp," Lund said. "I remember I gave a speech-type thing then. I said we have to work harder and get our fitness up, because I wanted to win state. This was the season basically, and we made history and I am so happy. We worked so hard for this."

Ann Arbor Greenhills keeper Leo Fried had a busy day in net for the Gryphons, and played extremely well with 10 saves.

"I thought we came out a little timid at first, but then we started attacking," Burda said. "Our boys want to play on the ground and play possessive, and they controlled the offense and they controlled the game. They were chasing us the whole second half. It was obvious desperation, but I think our boys kept their composure and we really stepped it up in the last 20 minutes. We just passed the ball around and kept the ball at our feet.”