The Tars paid close attention to Jack Guggemos, and the Chiefs had no answers until suddenly, their preparation for a late-game, must-score scenario played out with a dream result.

Down by a goal, Okemos (20-0-4) scored two within two minutes, 17 seconds of each other during the final 10 minutes to claim its third Finals title in a physical 2-1 victory.

Ben Hussey scored off a great assist from Guggemos to tie the game at 1-1, and Aidan Antcliff scored the game-winner on a free kick from 20 yards out with seven minutes, 42 second to play.

“I just tried to get to the end line, and Ben was there,’’ said Guggemos. “He made a great run to the box and tapped it in. You have to deal with what’s thrown at you.

Guggemos had a lot to live up to. His coach and father, Brian, won a Class B title as a senior at Mason in 1989.

“No pressure, right,’’ Jack said, laughing. “It’s a great feeling being able to celebrate this with him.’’

Antcliff knew his shot was in once he booted it.

“It’s an unbelievable feeling,’’ said Antcliff, who scored just his second goal of the year. “It was a great shot. I practice that shot in the summertime. I got the opportunity in this game, and I made the most of it. Once I hit it, I knew it was going in.’’ 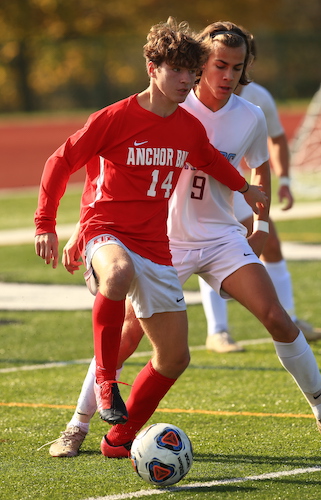 The Tars made sure Guggemos was surrounded any time he had the ball, sometimes with as many as three defenders.

“He was part of our game plan,’’ said Tars coach Nate Williams.

“It was a great game between two great soccer teams. We knew even up 1-0 we couldn’t take our foot off the gas.’’

Neither team generated offense in the first half, with most play at mid-field.

With 2:03 left in the first half, junior midfielder Francesco DiLorenzo blasted a shot past the Okemos keeper to give the upstart Tars a 1-0 lead heading into halftime.

Anchor Bay came out even more aggressive in the second half with the lead and a chance at the state title.

Guggemos was shackled, but he got free to send a pass near the net with 9:59 left that Hussey redirected into the net to tie the game at 1-1.

“It’s funny because my assistant coaches were talking about it,’’ said Okemos coach Brian Guggemos. “I’ve been doing it long enough to know you need to prepare for moments where you’re going to be down a goal. In the last three weeks we’ve practiced being down a goal. We’ve tried to make sure we were prepared for it. We said look, if we’re down a goal here’s the formation. We went into it right away, and then I told Ben and Owen (Brewer), our two forwards, get in there and crash the goal. That obviously turns the game around a little bit.

"Aidan hits a banger to win the state championship. We also practice those things everyday this time of the year. The guys have listened to the things we needed to do in practice. They paid attention, and that attention to detail has been pretty good for us."