The Yellowjackets’ senior goalkeeper set an MHSAA Finals record with 19 saves in helping Country Day to a 1-0 win over top-ranked and formerly undefeated Grand Rapids Forest Hills Northern in Saturday’s Division 2 Final at Comstock Park. His work including four saves in overtime and another in the deciding shootout earned Dougherty the Michigan Army National Guard “Performance of the Week.”

Dougherty split time in goal as a sophomore and junior before taking over as the primary keeper this fall. Country Day coach Steven Bossert called his keeper the state’s best after Saturday’s game, and the numbers this fall say plenty as well: a 0.61 goals-against average, .900 save percentage and 12 shutouts with a 17-4-2 record this fall and 28-7-5 record with 23 shutouts over his three varsity seasons. But the numbers do not tell the whole story. Country Day moved from Division 3 to Division 2 this season, and also had to replace a back line that included first and second-team all-staters and two more all-District defenders who help the team to last season’s Semifinals. The Yellowjackets ended this fall 20-5-2.

Dougherty made the difference one more time Saturday against a Forest Hills Northern team that excelled at sending long free kicks into the box to a group of big-bodied attackers capable of redirecting them into the net. Country Day made the decision to have Dougherty snag as many of these lofty passes out of the air as possible, and the 6-foot-3 standout shined. Then, in the shootout, after Country Day’s first attempt was saved, Dougherty followed with a save – keeping the shootout at 0-0 and amping up the pressure. The Yellowjackets went on to prevail in the shootout 4-2. Dougherty was named Wednesday to the Division 2 all-state first team by the Michigan High School Soccer Coaches Association and also is a pitcher on Country Day’s baseball team. He is considering opportunities to stay on the diamond after high school at either Macalester College in Minnesota or Johns Hopkins University in Maryland. He carries an unweighted 3.93 grade-point average and intends to study dentistry.

Coach Steven Bossert said: “In competition, I don't think that I've ever seen him drop a ball that he meant to catch. He does not bobble balls or give up rebounds. His technique is solid, and this athleticism and reactions are truly special. When you combine these special athletic talents with an exceptional mind, you get a goalkeeper that erases many defensive mistakes and keeps you in games when you may not be the better team.  … The luxury of having Jon behind our defenders is that it gave us a chance to learn and grow together without losing many games. And, the backs really came together in the playoffs and you saw the results, especially in the last two games when we played teams that were considered among the best in the entire state regardless of division. With Jon leading our defense, he helped the growth of the back line so that we were one of the best teams in the state. But the most obvious and greatest reason that we were able to beat the Forest Hills Northern team on Saturday was Jonathan Dougherty. He was the difference. … At times, I thought he was wearing a red cape with an "S" on the front of his blue goalkeeper's kit. Several times in the first half he made aerial saves and catches 8-10 feet in the air in lots of traffic. Only the best keeper in the state catches those balls, and no one holds onto them when you come crashing through players and then the ground. Jonathan did.”

Performance Point: “I’m really just proud of the way our defense played throughout the whole game," Dougherty said. "Looking back at it, they blocked a few really important shots. Our left back James Naaman, at the end of the game, we were watching it on film, they had a shot that would’ve been a screamer, probably into the top corner, that he used his face to get in front of and block. That was one of the things that stuck out, that play in particular, and of course the penalties (shootout), just the guys stepping up and taking care of business. … On the film, everything looks a little bit quicker. In the game, everything was kinda slowed down for me. I felt like I had a lot more time than I actually did. The decisions in-game were pretty instinctual. There was really no thinking; it was just I saw the ball in the air and I thought I could go get to it, so I went after it.”

Drive for 15: "Country Day has a really long historic tradition of being competitive in the division that we’re in. At the beginning of the season this year, we knew we were going to have a really talented group. That was the goal from the start of the season – it was always to win the state title. We didn’t just want to compete; we wanted to win." 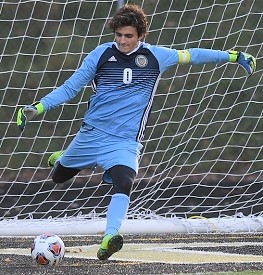 Time to lead: “The whole first half of the season was really just a growing and learning experience for me, getting used to the guys in front of me, us getting used to each other. Just playing with each other, gaining experience in games. I had to take on more of a leadership role because last year I split time, I only got half the games. But this year I was a captain as well as the primary keeper. The first half of the year, it was kinda hit-and-miss, I’d say. As we started to put things together and figure out who our four main starters were going to be in the back line, we really started to click and mesh well. That’s when we started playing our best soccer. … I just tried to keep our guys motivated, positive, in the game at all times. In our state semi game, we gave up a goal really early to Cranbrook in the first two minutes, and I just kept telling the guys, ‘There’s a lot of soccer to be played. Keep your heads in the game. Do not lose it.’ You saw the result (a 2-1 overtime win): They clearly were staying in the game and just playing through whatever got thrown at us. … At the beginning of the year I thought it was going to be a huge responsibility, working with the young back line. But the guys really stepped up, and they made my job easy.”

Crossover: “The positions I play in both sports are really similar. I’m a pitcher in baseball. You have to have the same mentality, because one mistake on your part could cause your team the game in either sport. It’s definitely a mental toughness … a level-headedness almost because you can’t ever get too happy about things and you can’t get too upset about things. Because there’s a game in front of you, you have to be able to bounce back and be mentally tough.”

Setting up for the shootout: “Over my soccer career I’ve been in three. We had one my sophomore year, against Farmington (Hills) Harrison in the District semis (a 1-0 win). We weren’t really that competitive that year. I was the shootout keeper, and it was a good experience to get familiar with the shootout process and to gain confidence. Our junior year we lost a heartbreaker in PKs to Flint Powers in the state semis. I think that was just invaluable for us as a team and for me. To experience that kind of loss and know what it felt like and be able to come back and do it again this year with the same confidence, it was big for us – and that kind of experience was big for me too.”