A three-year varsity player, Le scored Central’s first two goals in an eventual 3-1 win over rival Portage Northern on Sept. 19 to earn the Michigan Army National Guard “Performance of the Week” for Sept. 18-24. Portage Central hadn’t beaten Northern since 2014, and the win helped the Mustangs move up two spots to No. 2 in last week’s Division 1 state coaches rankings. After Saturday’s loss to Grand Haven, Portage Central is 12-2-3 and ranked No. 4.

Le is part of an experienced group coming off an 11-6-4 finish in 2016, and the Mustangs this season also have downed reigning Division 1 champion and current No. 8 East Kentwood. Le is focusing on soccer this school year but previously also ran cross country and track and played basketball. He’s also active in the hallways; he’s serving his fourth year as a student council representative and also served as treasurer as a junior.

Carrying a 3.7 grade-point average, Le intends next year to continue playing soccer while studying biochemical engineering at Hope College. But there’s still plenty to accomplish in high school, starting with helping to power Portage Central as it pursues its first MHSAA boys soccer championship. The Mustangs could see Northern again in a Division 1 District Semifinal.

Coach Andrew Rice said: “Minh has a great first touch on the ball, and he hardly loses the ball off his first touch. This allows him to make positive decisions with the ball at his feet. His work rate is second to none; he doesn't have to be told twice on what needs to be improved. When we are at our best as a team is when individuals like Minh bring their commitment to success through dedication and their work ethics. We talk in the program about being humble and staying the course. Being ranked as high as we are for the first time in program history is obviously an accomplishment. But at the end of the day we know it is just a number, and someone has to be there. Minh is one of the seniors that leads by example each day what it means to stay humble and continue working towards the end goal, which is bringing the first state championship to Portage Central.

Performance Point: “It was all about teamwork. I’m super glad we got over the hump,” Le said of Central finally downing the rival Huskies. “It was hard work. We were struggling a lot last year about it. We couldn’t figure anything out. So we focused on the following year, which was this year, and working together as a better team, and bringing a better mindset to the game and being smarter on the ball. … We take advantage of the field. Ours is one of the widest in the state, so we usually play wide and we took advantage of that (against Northern) because a lot of teams can’t. It was all about good looks, I guess.”

Rise to the top: “We just have to work harder at this point. The season’s almost over. Everyone’s mentally and physically tired. We just have to work through it and get the job done. … I’ve been training a lot more (by) myself, actually. In the offseason, I’ve been working harder than usual, looking forward to this year, my senior year.” 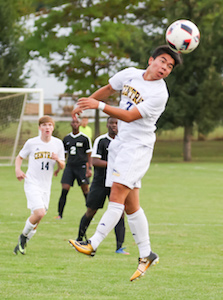 Problem solver: “Other classes, sometimes, I don’t do well in. But chemistry and all the math stuff, I’m pretty excellent at. And I get more interested every year I learn. I just have a different mindset to school, and I love equations and making things different and figuring out a solution.”

Voice of the people: “I love being a part of the student body and getting involved in a lot of stuff. For me, (student council) helped me connect with more of my peers that way and helps them get a voice (in) the school. I was always interested; I didn’t really take a chance (to join) in elementary school, (but in) middle school when they gave me a chance and I joined, I loved it.”

Revving with Ronaldo: “(Cristiano) Ronaldo is one of my best heroes. Growing up I watched him. Before every game I watch a video of him scoring goals and doing different skills. I still do to this day. It gets me more motivated, gets me more hyped up.”