COMSTOCK PARK – There is always a question posed to a team that has just won consecutive championships – a question that is sometimes not that easy to answer.

Is it harder to win that first title, or harder to defend?

The boys soccer team from Burton Genesee Christian let its results do the answering, as it made a historic run through this year's MHSAA Division 4 Tournament.

The Soldiers capped off their second straight championship run with a 3-0 win over Muskegon Catholic Central on Saturday at Comstock Park High School.

It was the Genesee Christian’s 16th shutout of the season, and incredible seventh shutout in seven games during the tournament.

With Saturday's goal total, the Soldiers outscored their opponents 27-0 during the great run.

And leading the defensive way for Genesee Christian was senior goalie Zach Noecker, who did nothing to hurt his 0.63 goals-against average heading into Saturday's title game. He had seven saves against the Crusaders.

"This is amazing," Noecker said. "I have a great defense ahead of me, starting with (senior defender Tyler Rose). They are all phenomenal, and we are all best friends. Our goal for this postseason was to go for the shutout, because you can't lose if you don't get scored on."

A confident keeper and defense like that has made the Soldiers offense able to gamble and push a little harder, and they did just that Saturday, especially early.

In the game's first 16 minutes, Genesee Christian put two goals on the board.

The first, at the 31:58 mark, came on a beautiful corner kick by senior midfielder Cole Russell – a corner kick that found the back of the net.

The second, at 24:14, also came on a corner kick, but this one was fielded by Rose, then passed to senior forward Caleb DuPree, who headed the ball past Crusaders goalie Connor O'Neill. 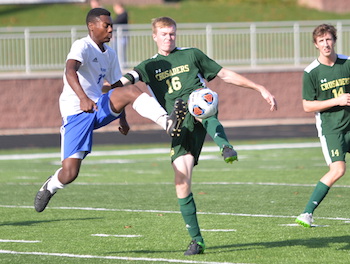 DuPree scored again with just over three minutes to play in the first half on a spectacular unassisted goal.

"My coach always makes fun of me for not playing defense," DuPree said. "For the past two seasons our defense has been remarkable. They make it easy for us forwards, knowing we just have to be at the right place and time our moments. They do all the dirty work."

Great problems to have, a stingy defense and goalie, and a dynamic offense. And all this coming from a school with 114 total enrollment and 23 on the soccer team.

"This is a testament to these guys' work ethic," Genesee Christian coach Doug Anderson said. "(Assistant coach Chris Rainear) and I have a system we are trying to run, and these guys buy into it. And I'm telling you, it really works. When you get a group of guys, 23 of them, that sell out and say they will do anything to win a state championship, then you have a good chance to win."

Anderson said one of things he worried about early in the year was complacency after winning the program, and school's, first MHSAA championship in 2015.

"This was a tough one," Anderson said. "You want to get the guys motivated at the beginning of the year, and at the start of the year we had a philosophy of 'Win from Within.' And I told the guys if you want to win again, it will have to come from within yourself. And luckily I have a senior class that didn't need to be prodded too much."

Muskegon Catholic Central coach Bill Moulatsiotis said his team's lack of experience in a game of this magnitude finally caught up with the Crusaders.

"I think our inexperience showed today," Moulatsiotis said. "The gravity of the game, and the implications of what this might mean for the boys, was a lot. We tried to keep it as normal as possible, but obviously Genesee has been here before, and they knew what to do."

PHOTOS: (Top) Burton Genesee Christian players rush to get a hand on the Division 4 championship trophy. (Middle) Soldiers forward Caleb DuPree gets a foot on the ball with MCC’s Robert Ahern defending.