The Sailors made things happen with their length and athleticism, living off set pieces and capturing an MHSAA Division 3 championship with a 3-1 win over Finals rival Grosse Ile on Saturday at Comstock Park High School.

South Christian seized its first state title in six years and the fourth since 2010, featuring three different coaches among those quartet of championships. It was Vande Kopple’s first season with the Sailors after 15 years with Lansing Christian, which he led to the Division 4 title in 2013. His new team solved Grosse Ile after South Christian’s narrow Finals losses to the Red Devils in 2019 and 2020.

“There was just a focus all year long. It was a resiliency that I hadn’t seen before in a soccer team,” said Vande Kopple, whose Sailors finished unbeaten at 22-0-3. “We’ve been down two goals a couple times and they found ways to win, and it was all about getting back here and giving ourselves (a chance) and we did.

“I thought Grosse Ile was a fantastic team. They played great soccer and they made it an amazing game, but it was just one of those things where I think our seniors who have felt that pain weren’t going to let it happen again.”

Grosse Ile was No. 2 in the last Michigan High School Soccer Coaches Association Division 3 rankings, while South Christian was No. 5.

“It’s crazy – just to get to the Finals one time, let alone three times and face the same team three times in a row, I don’t think that’s something that anybody would ever expect,” Grosse Ile coach Jon Evans said. “I think it says a lot about both of our programs and our successes that we’ve been able to have.” 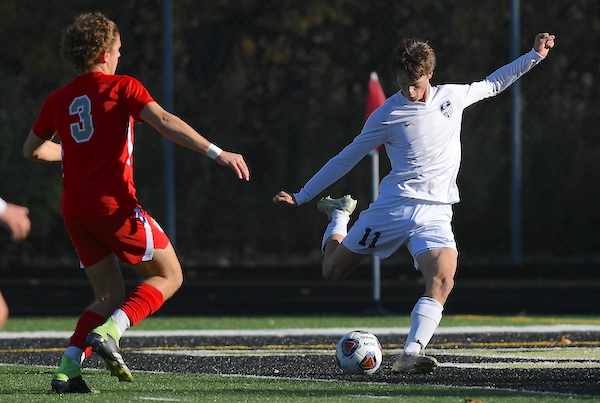 South Christian scored first on a penalty kick by 6-foot-3 senior Levi DeRuiter 12 minutes into the game. It stayed 1-0 until early in the second half, when senior Logyn Huttenga scored off a set piece to give the Sailors a two-goal lead with 36:24 left in the contest.

Grosse Ile senior Jon Duke gave his team life on his penalty-kick tally with 17:14 left to pull within 2-1.

But with the Red Devils in desperation mode during the game’s final moments, 6-6 junior Sam Medendorp put it away on a goal with 2:42 left.

“At the beginning of the year, I didn’t know how we were going to score goals. And then one of the first practices, Levi chucks it in 60 yards and we said, ‘Ah, we can do something with that,’” Vande Kopple said with a laugh.

“We don’t really have natural goal scorers, but we just find ways to get it done.”

Vande Kopple noted how poetic it was that Medendorp notched the goal that put it away for South Christian.

The coach said that the lanky, animated forward is the biggest cheerleader on the team, encouraging teammates to keep their heads up.

Medendorp said the Sailors’ size was a big threat, especially on set pieces and corners.

“It was very different (this season),” Medendorp said. “Our whole coaching staff was (in) their first year here. It was very good to add new ideas and new people into the program. (Vande Kopple) was very personal, which was very important to me and especially the team, and he just pushed all of us harder and better and was very organized in how he coached.”

Shots were even between South Christian and Grosse Ile at nine apiece.

“You know, we weren’t the better team on the day,” said Evans, who is 136-8-10 in six seasons at the Red Devils helm. “If we play this game 10 times, who knows how the results would turn out, but today wasn’t our day. They took advantage of their set pieces like we assumed they would, and they put the ball in the back of the net."