COMSTOCK PARK – Mason Smith and the Flint Powers Catholic boys soccer team were not about to have the same ride home this year.

Last year the Chargers dropped a heart-breaking one-goal loss in the Division 3 Final, and Smith remembers how he and his teammates felt after their loss to Grand Rapids Catholic Central – and how long that ride home lasted.

All you had to do was look at how big Smith's smile was after Saturday's championship game against Ludington to know this trip home would feel much shorter.

"(Last year's loss in the Finals) made this happen," said Smith, a senior midfielder and captain for the Chargers. "Losing last year helped us overcome a lot of things. We just put in our head that we didn't want to lose like last year."

The Chargers came out on fire, and appeared to score an early goal in the first half – but the goal was taken off the scoreboard because of a foul.

That setback didn't slow Flint Powers down, as the Chargers got their first goal that counted at the 26:07 mark from junior midfielder Garret Delamielleure.

Ludington tied the game just more than six minutes later on a penalty kick by junior defenseman Noah Peterson, but Flint Powers scored at the 12:46 and 10:31 marks with goals by Delamielleure and senior midfielder Dominic Ruth. Ruth's goal was a beautiful header.

"I knew we were capable of starting out like that," said Flint Powers coach Tony Rowe, whose team ended its year at 21-2-1. "To get that goal called back, that was like a two-goal momentum. But the boys kept at it, and I am so proud. We never quit attacking."

It was that attacking that flustered the Orioles. 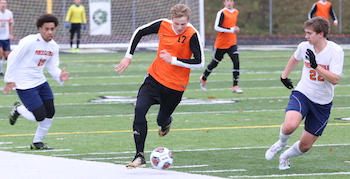 "I think the pressure got to us in the first half," said Ludington coach Kris Anderson, whose team completed its year at 18-5-2. "Our back line was out of sync. We had some people moving around in spots, and we missed some balls. We weren't organized back there."

But Ludington would not quit, and cut the Flint Powers lead to one goal with just over 17 minutes to play on a goal by senior midfielder Lucien Chasse.

However, 24 seconds later, Powers senior defenseman Connor Boerman capped the scoring for the game on a penalty kick after a Ludington foul, and sent the Chargers home happy.

"Ludington gave us a heck of a game," Rowe said. "Props to their coach and their team. I know what it feels like to lose in a state championship game, and they have nothing to be ashamed of, the way they played. They had an incredible season."

The two goals the Orioles scored Saturday were the only goals Flint Powers gave up the whole tournament.

"The first half we put ourselves in a hole," Anderson said. "But  we talked at half, we said this game wasn't over, we have been in this position before being down two. We got that one, but then the call in the box (and Flint Powers' penalty kick goal) changed everything.”