Woldyk didn't flinch at the challenge, as he rushed out of the box and slapped away the attempt to preserve Unity's one-goal lead at the time.

The pivotal stop proved big for the third-ranked Crusaders, who went on to beat the Northmen 3-0 and win the title at Pat Patterson Athletic Field.

“I saw him coming at me, and pretty much what you have to do is come out and make the goal smaller and make your body big,” Woldyk said. “You hope to get a piece of it, and I did. It was pretty big because they were getting the momentum there.” 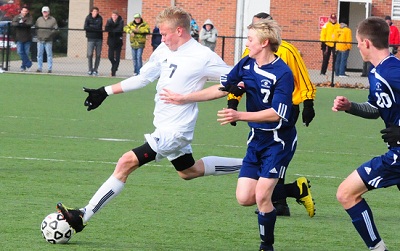 Unity led 1-0 when Woldyk came up big, and Petoskey coach Zach Jonker pointed to the play as a turning point.

“That save their keeper made two minutes into the second half was probably the play of the game,” Jonker said.

“Nick came out and made a great save that had to be made,” he said. “That really helped us out, and if they would've scored, I think it could've been a different outcome.”

The victory capped off another remarkable season for the state's perennial powerhouse, which finished 25-2.

It wrapped up the Crusaders' third MHSAA crown in the last six years after they also won in 2007 and 2009.

It was their fifth Finals appearance in the past eight years. They finished runner-up in 2005 and 2011 (Division 3).

“As a coach, you want to be peaking come tournament time, and that's exactly what this team did,” Unity coach Randy Heethuis said. “We were playing our best soccer as a team, and we defended very well. We really came along defensively and played a lot better together.”

Unity got on a roll after losing 3-1 to Holland last month.

It ripped off 10 straight wins, including upsets of No. 1 Spring Lake and No. 2 Ada Forest Hills Eastern in Regional play, and outscored opponents 37-5.

“I think that was the toughest region in the state for Division 2, and that was huge,” Heethuis said. “The entire tournament, we gave up one goal over the run of play, and we really came along and played a lot better together defensively.

“It took a lot of work to get through that region, and I'm happy to finish it off with the exclamation point today.”

The second half was much different, however, as Unity used its size and speed to pepper the goal.

The Crusaders had eight shots on goal in the second half, compared to only two during the first 20 minutes.

“I thought once we absorbed the pressure, we settled in and looked OK,” Jonker said. “We knew (we) could not possess the ball, and maybe we should've played more direct, but it is the most imposing team we've played all season. We had a couple of breakdowns, and they converted.”

Unity senior Jake Love put the final touches on Unity's championship run with a beautiful goal in the right corner from 20 yards out.

“We really stepped it up in the tournament, and I'm proud of my boys,” Love said. “We had much more intensity than during the (regular) season, and going out like this my senior year is wonderful. I wouldn't want to leave any other way than winning a state championship. It's great.”