NOVI – Hudsonville Unity Christian junior Jordan Bruckbauer was likely the only player on his team who remembered his first goal of the 2018 season, which came earlier this fall before the playoffs began.

But it’s a safe bet nobody on his team, or anyone else in the Unity Christian athletic program, will ever forget his second.

With 7:09 remaining in the first half of overtime of the MHSAA Division 3 championship game, Bruckbauer simply saw an opportunity and pounced on it.

The ball was loose in the box, Bruckbauer won the race to it, and volleyed the ball into the goal to give No. 2 Unity Christian a 2-1 lead over No. 1 Grosse Ile.

Bruckbauer’s second goal of the year turned out to be the championship-clincher, as

Unity Christian added an insurance goal during the second half of overtime en route to a 3-1 victory.

It was Unity Christian’s first MHSAA Finals championship since 2014.

“I always kind of picture in my head doing something great,” Bruckbauer said. “But then sometimes it never really happens. Having it happen is a dream come true. It’s indescribable.”

Grosse Ile took a 1-0 lead with 3:24 left in the first half on a goal by senior Christian Drzyzga, who fired a shot from roughly 25 yards out that deflected off a defender and into the goal.

At that point, it wasn’t illogical to think that would be the game winner, since Grosse Ile had a run of 21 straight shutouts during the regular season and had given up just one goal during the MHSAA tournament going into the game. 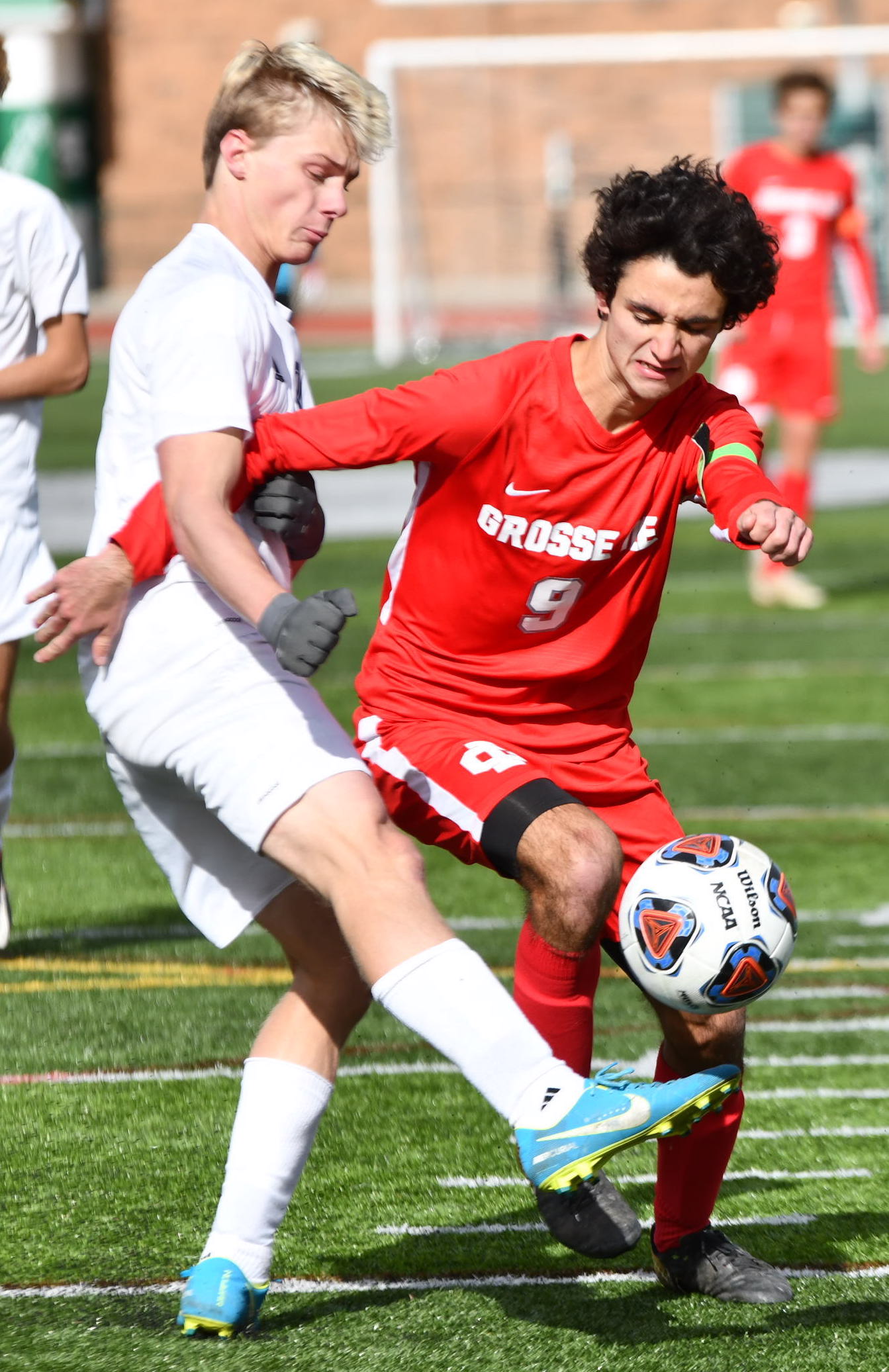 But Unity Christian answered less than a minute later, as junior Kadin Shaban got fouled while pursuing a loose ball in the box and converted the ensuing penalty kick to tie the game at 1-1 with 2:42 left in the first half.

The second half didn’t yield many quality scoring chances on net, and the only real close call before Bruckbauer’s goal came early in overtime when Shaban hit the post on a free kick from 30 yards out.

Then, Bruckbauer jumped on the loose ball and put Unity Christian in control.

Unity Christian put the game away with 7:18 left on a goal by Shaban, who took advantage of a gambling defense that had players up the field by going on a mini breakaway, shielding the lone defender back from the ball and then chipping a shot over the keeper’s head to make it 3-1.

It was Shaban’s 31st goal of the season.

“Two evenly matched teams going at it, and both teams defended really well,” Unity Christian head coach Randy Heethuis said. “It was good for us to score right after they scored to tie it up. In the second half, we thought we were really putting some pressure on them at the end of the game. We wanted to start out hard and fast in overtime. Credit to Jordan for getting the biggest goal of his life.”

Grosse Ile finished its season 27-2, with its only other loss coming to Detroit U-D Jesuit.

“They are very similar to U-D in their size and athleticism,” Grosse Ile head coach Jon Evans said. “We knew it was going to be a battle. They won a lot of 50-50 balls, and a lot of that can change games. They then got on the end of a couple (chances).”