MARQUETTE – Dynasties come to an end eventually, no matter what the sport.

The Redmen dominated the competition again in winning its fourth championship in a row. They ended up with 312 points, well ahead of second-place Houghton’s 239. Sault Ste. Marie finished third at the meet with 203, Gladstone took fourth with 167 and Ishpeming/Negaunee ended up fifth with 123.

Even though it has become a routine for the Redmen to finish on top at the U.P. Finals, Marquette head coach Nathan McFarren said that each championship continues to be meaningful to both him and his team.

“It still feels pretty awesome,” he said. “What we’ve been able to accomplish is incredible. I’m just happy to be along for the ride.”

“I give a lot of credit to this team. They realized that they needed to have respect for themselves and their coaches and have fun at the same time. You can’t be in sports without having fun and trusting each other. After that, the success just fell into place. We’ve won titles before, but this one was extra special. It was just an incredible day.”

The most impressive part of Marquette’s victory was that it won only two events – both were relays. The Redmen won the 200-yard medley relay and set a U.P. Finals record in the 200 freestyle relay with the team of Andrew Kilpela, Ryan Glover, Jed Weber and Matthew Nykanen. 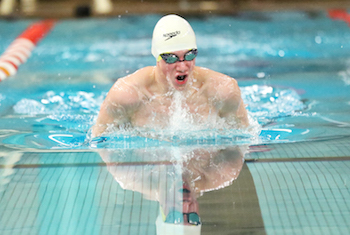 “To top off that day with that record relay was just great,” McFarren said. “This pool has never seen that before and that’s pretty cool.”

Houghton gave Marquette a good fight, but the Redmen pulled away in the later events. The Gremlins won two events, as Peter Jaszczak took first in the 100 butterfly and Sal Sharp finished on top in the 1-meter diving event Friday.

“Our boys really stepped up big for us,” Houghton head coach Erik Johnson said. “I was hoping going in to have a chance at second, and our divers set the bar high. Literally, everyone contributed today and Peter set a school record in the butterfly. They all did very well.”

Sault Ste. Marie won three of the events, the biggest being Andrew Innerebner’s U.P. Finals record in the 200 freestyle. The Blue Devils also received first places from Leevi Olson in the 50 free and 100 breaststroke and also won the 400 free relay.

Sault Ste. Marie head coach Steve Habusta was pleased with how his team performed despite its youth and inexperience.

“We’re a young team and we’re still learning the process, but today went well,” he said. “Finishing third is great, and we are where we want to be. This is also where I expected us to be, and we’re going to continue to get better.

“I think Andrew is the U.P. swimmer of the year, and to set a record like that is pretty phenomenal. Leevi also had a great day by winning two events with both different strokes and different lengths. That isn’t easy to do.”

Gladstone’s Matthew LeClaire picked up both of the Braves’ victories. He won the 200 individual medley and set a U.P. Finals record in the 100 backstroke. Kingsford’s Caleb Plumley was the final individual champion as he won the 500 free.

PHOTOS: (Top) A Marquette swimmer launches during a relay at Saturday's Upper Peninsula Finals. (Middle) A competitor powers through his swim at Marquette High School. (Click to see more from Jarvinen Photos.)