Coach Stefanie Kerska said she was thrilled with the way her team performed throughout the entire competition, earning 369 points. That total was nearly 100 points more than the Pioneers’ closest competitor.

“I am super pleased, I think we just wanted to be consistent from the start to the finish of the season,” Kerska said. “I thought they did such a great job doing that. Whether it was their preparation, execution, or just the way they’ve handled themselves, they’ve really been a dream.”

But the day got off to a fast start for Saline, which finished second in the team standings. The Hornets took home the top spot in the 200-yard relay with a time of 1:30.35, more than a second faster than any other team and breaking a Hudsonville pool record. But Pioneer wasn’t far behind, finishing in second place, with a time of 1:31.74.

Another pool record fell in the second event of the day, the 200 freestyle. Pioneer senior Matthew Segal earned it with his time of 1:38.24 and added 20 points for his team. Northville senior Conner Halberg touched the wall less than a second after Segal, clocking in at 1:38.87. Rounding out the podium was Saline junior Matt Adanin at 1:41.41; he would later finish runner-up in backstroke as well.

The Pioneers topped the podium again in the individual medley, with junior Ryan Hume touching the wall first in 1:50.37.

“I’ve been training for the whole year for this 200 IM,” Hume said. “I just had one mission, which was to win. I’m hoping to win again next year and hopefully break a varsity record.’ 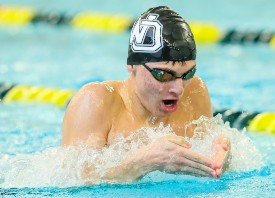 During the sprint of the afternoon, the 50 free, West Ottawa claimed two of the top three spots on the way to finishing team runner-up. Junior Kevin Maas finished first with a blistering swim of 20.60 seconds to break the pool record. Senior teammate Josh Rottier finished in third (21.33), as Lake Orion senior Dane Herrick finished in the middle with a time of 21.13.

Even though his team finished just off the top of the podium, West Ottawa coach Steve Bowyer said he was beyond pleased with the way the Panthers ended the season.

“We knew coming in this year that Ann Arbor Pioneer was going to be really tough to beat,” Bowyer said. “We came in hoping for a runner-up finish and our guys got the job done today … we had some really nice performances today.”

Just like most other events on the day, Pioneer dominated the one-meter dive, as senior Cole Tremewan won by nearly 40 points, scoring 449.05.

“I’m so happy for our diving program and for Cole winning; it was such a big moment for him,” Kerska said. “I know he felt a lot of pressure and handled it so beautifully.”

The 100 butterfly proved to be a race where Saline could claw back some points, finishing two swimmers among the top 16 to Pioneer’s one. Huron Valley junior Fletcher Smith topped the podium with a time of 50.40.

In the 100 free, Pioneer placed three swimmers among the top 16, while Saline had two. But the Hornets got more points earning the individual title thanks to senior Ethan Saunders’ blazing 44.64.

The Pioneers padded their lead in the 500, placing two swimmers among the top three, Hume finished in second (4:31.93) and junior Cameron Williston finished in third (4:40.80). Northville’s Halberg finished just ahead of Hume with a time of 4:31.31.

A new LP Division I Finals record was set in the 200-freestyle relay by West Ottawa’s team of Rottier, Tai Afrik, Alex Boersema and Maas, who finished in 1:23.25. Maas closed hard, finishing the final leg in just 19.94. Saline came in just milliseconds after the Panthers (1:23.68). The Pioneers weren’t far behind, clocking in third with a time of 1:25.32 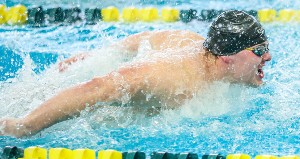 “It was really close, Saline’s freestyle was superfast, so I knew I had to bring it home for the team,” Maas said.” That was our goal, to get that state record, for the entire season. We talked about it like every day.”

Pioneer put two more finishers among the top 16 in the 100 backstroke, which was won by Rochester junior Jack VanHowe in 49.35. Pioneer then dominated in the 100 breaststroke, with Segal posting an all-division/class Finals record of 53.26.

Segal said he was thrilled with the accolade, but the team title means so much more.

“This team is amazing,” Segal said. “I’m really happy about all my other events, achieving state titles in individual events is really fun, but winning it as a team is a surging sense of pride. To accomplish something we know we’ve been working for, we’ve had it in our minds the whole season.”

The title marks the Pioneers’ first since 2009. Though they don’t plan on waiting 12 years before winning it again, finally breaking the drought meant a lot to this team.

“It means a lot. ... I was on those Pioneer former state championship teams, so I know what it means to the school and the community,” Kerska said. “I’m just so glad that we’re bringing back the tradition of Pioneer swimming and diving.”