PORTAGE — With teammates screaming and cheering on the sidelines, a stunned senior and freshman doubles team clinched the winning point for Grosse Pointe Woods University Liggett on Friday.

After falling a point short last year, Liggett was hungry for that team title.

“It never gets old,” said coach Mark Sobieralski, who has three team titles in his seven years as head coach. “It’s another special group of kids.”

Both finalists pulled upsets in the semifinals.

The second-place finish was a win of sorts for Unity Christian.

“Last year was the second time we ever went to state, and we tied for 11th. So making it to the finals this year is pretty special,” first-year coach Brad Miedema said. “Personal best for the school so far.”

With Liggett leading, 4-0, Jarial and Ugval pulled out a hard-fought 7-6(6), 7-5, win against Jake McNamara and Micah Riddering.

Neither realized their point was the clincher at the time.

“Right after I came (off the court), my team said I was the clincher, me and Tommy,” Jarial said.

“It was just an amazing feeling. I can’t explain it. We’ve been working for this all year, and I’m really excited to hold that trophy up.”

Ugval, a freshman, was literally speechless when he got the news.

He credited his senior partner with keeping him calm during the match.

“(Jarial) taught me a lot about the game and helped motivate me,” Ugval said.

“I was really nervous toward the beginning of the year and especially today since it’s my first state championship.”

Sobieralski said that was one reason he paired the two.

“For a freshman, (Ugval) really handled himself well out there,” he said. “It was nice to have a senior with a freshman because the senior was able to calm him down and give him confidence.”

One Liggett senior still has one more goal to meet.

Will Cooksey, who is headed to University of Michigan next fall, will try to make it a four-year sweep next week at the Division 4 No. 1 singles championships at Portland High School.

“This is my last ride,” said Cooksey, the three-time reigning D-4 champion at No. 1 singles. “I’m going to try to bring home that fourth title.”

Cooksey, who is ranked eighth nationally in the USTA 18-under division, was first off the court, defeating Unity Christian’s Ryan Broek, 6-0, 6-1.

That was just perfect for a guy who is one of the most vocal cheerleaders for his teammates.

“I love cheering on the team,” he said. “It’s exciting to get the guys energetic and going. I just love the team environment.” 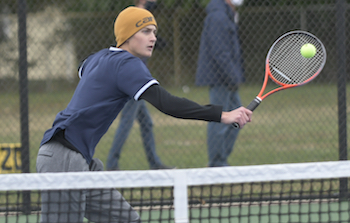 “He’s a national champion, 18-under, and he plays on our team because he loves the boys,” the coach said. “He’s a leader.

“He comes to practice but doesn’t practice. He takes four or five kids and works with them and then goes (and) practices on his own. He’s a great cheerleader, always up and down, screaming and yelling.”

Sobieralski said his team took a few unexpected hits to start the season.

“We had a freshman who was supposed to come in this year and he moved to Florida,” he said.

“We had a starter from our team from last year who decided to stay in Maine. Those were two people we were counting on, so we didn’t know how we were going to be.”

But a few others stepped up.

“I have to commend Alec Leonard,” he said. “He just came out for the first year. He’s the captain of the baseball and the hockey teams.

“He just wanted to play tennis with his friends and worked his butt off. Fourth doubles (with Rocco Scarfone) were just amazing today. They won both their matches, and it was just shocking how well they did today.”

“He was in quarantine 14 days,” the coach said. “He didn’t have the virus; he was around somebody.

“He had four negative tests, and he was released (Friday). He hasn’t played in two weeks. With all this going on, it’s just amazing we did this. It’s just exciting.”

The Knights also had an angel, a porcelain one, on their side.

“It’s from the 1930s and every coach from Liggett has passed it down, and we bring it every year and the kids all take it and hold it, rub it,” said Sobieralski, who kept the angel in his car during the matches.

“It’s a special thing we have every year, and I freak out because I don’t want it to get broken.”

In upsetting the No. 1 seed in the semis, Miedema said starting fast was a key.

“I just knew that we had to get going right away,” he said. “I knew if we came out with energy right away and ready to play, we could take it to them and hopefully get the upset, which we were able to do.”

He said the finals match was closer than the 8-0 score indicates.

“We started off well and stayed in a lot of matches,” he said. “We had two matches that went three sets and a couple other close matches out there.

“The boys played their hearts out, and I’m not disappointed in anything they did out there.

“It’s been wild. I knew we were good going into the year, so we had pretty high expectations. But this definitely exceeded what we were hoping for.

Other doubles winners were Vince Maribao and Tomlinson, 5-7, 7-5, 6-2, over Brendan Bremer and Jack Christian at No. 1, and Bennett French and Campbell Marchal, 6-2, 7-5, over Nate Lenters and Ben Timmermans.

PHOTOS: (Top) A Liggett player returns a volley during a match Friday at Portage Central. (Middle) Hudsonville Unity Christian advanced to the Final with an upset of top seed Traverse City St. Francis. (Click to see more from HighSchoolSportsScene.com.)