KINGSFORD — All season long, the Escanaba Eskymos and the Negaunee Miners were the top two boys tennis teams in the Upper Peninsula, seemingly on a collision course to fight for the Division 1 championship for the second-straight year.

Turns out that premonition was accurate, and for the second-consecutive season, the Eskymos left with the championship, recording 17 points compared Negaunee’s 15. Marquette finished third with 13, Kingsford took fourth with five, Menominee placed fifth with two points and Gladstone did not score.

Escanaba won flight championships at No. 4 singles, No. 1 doubles, No. 2 doubles and No. 3 doubles. The Eskymos also finished runners-up at No. 2 singles and No. 4 doubles.

“I’m just happy for the kids,” said Escanaba coach Tom Penegor. “This is all about them. They put in a lot of hard work and practice time, and it’s just a bunch of kids that worked together. They deserve this.”

The Eskymos can thank their doubles players for their repeat. At No. 1 doubles, Isaac Maki and Dawson Williams upended James Thomsen and Jace Turri of Negaunee 6-1, 6-2, while No. 2 doubles Joseph Hubert and Joseph Montel defeated Negaunee’s Gavin Downey and Bryce Storms by the same score.

The No. 3 doubles tandem of Connor Smale and Troy Delvaux knocked off Marquette’s Isaac Johnson and Liam McFarren 6-2, 6-4 for the third doubles point.

Escanaba’s other flight championship came off the racquet of Sam Rivera, who battled back from a slow start to get past Mick Kumpala of Negaunee 0-6, 6-2, 6-3.

The No. 1 doubles match was indicative of the Eskymos’ efforts.

“I would say these were some of the best performances we had,” Williams said of his and Maki’s road to the championship. “I’m not going to look back and say, ‘Hey, we could have done better.’” 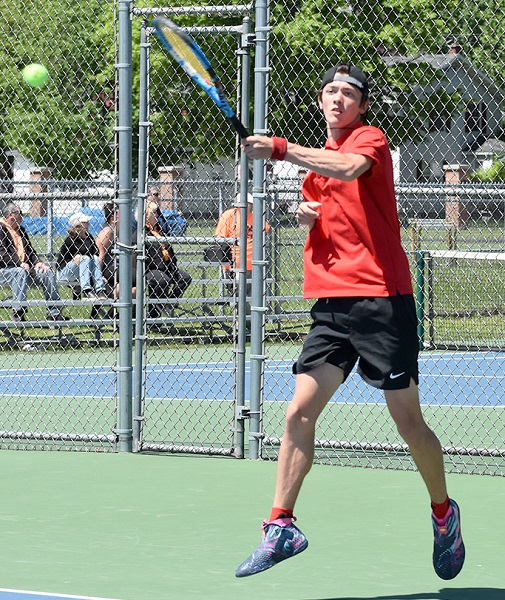 Williams, the ground stroker, and Maki, the imposing net presence at 6-foot-4, drew a bye into the second round where they battled past Kingsford’s Isaac Nash and Ben Trevillian 4-6, 7-6, 6-4. With the win in the final, the Escanaba duo closed the season unbeaten and secured their second-straight U.P. Finals title.

Escanaba’s depth was in evidence during its run Wednesday and all season, Penegor said.

“We have 35 kids that went out this year, and that’s unusual,” said the seventh-year Escanaba coach. “There are some teams out there that barely have 12 kids. I think part of that is if you have success, that can bring more kids to play. And Escanaba for many years has been a tennis community. We have had a lot of past U.P. champions, a lot of people that played in college.”

Runner-up Negaunee, which had its three-year run at the top of Division 1 in the Upper Peninsula end last season, received championship efforts from No. 2 singles player Gavin Saunders and No. 3 singles Tyler Lajimodiere. Saunders defeated Nathan Howes of Escanaba 6-2, 7-5, while Lajimodiere knocked off Chase Thomsen of Marquette 6-2, 6-3.

Marquette scored victories in the other two flights. Senior Nick Olivier showed his powerful game in beating Luke Syrjala of Negaunee 6-3, 6-1 at No. 1 singles, and Seppi Camilli and Toby Camilli topped Evan St. Peter and Parker LaFond of Escanaba 6-3, 7-5 at No. 4 doubles.

For Olivier, his title was another in the long line of family U.P. singles championships. His father Wayne won the 1983 No. 1 singles flight, while his brother Alec won four titles at No. 1 singles from 2016 to 2019.

The new family champion said he improved his athleticism and his feet during the summer, and he showed that Wednesday as he was often able to run around his backhand in order to blast away with his forehand.

Olivier said his performance was inspired by the late Jordan DeMay, a friend and basketball teammate at Marquette High School who died in March.

“A lot of motivation to do this,” he said, “was for my friend Jordan.”

PHOTOS (Top) Escanaba's Nathan Howes gets airborne to return a shot during Wednesday's Division 1 Final at Kingsford. (Middle) Marquette's Nick Olivier returns a volley during a No. 1 singles match. (Photos by Dennis Mansfield.)