For starters, the crowds were much smaller at the Midland Tennis Center. Due to COVID-19 precautions, the tournament was switched to a head-to-head team format that saw a total of 64 teams spread out through four divisions and 16 sites.

But at the Division 2 Final, the end result remained the same as the season before.

Top-seeded and undefeated Forest Hills Northern took on No. 2 seed Mattawan. The No. 2 doubles team of Aaryan Singh and Jack Sparhawk sealed the championship for Northern with their 6-0, 6-2 victory over Carson Brinks and Sam Sullivan the fifth and deciding point.

“I’m just glad the MHSAA figured out a way for us to play,’’ said Singh. “This is sweeter for me than last year because this is my first year as a starter. A month ago, I didn’t know if we’d even get a chance to play.’’

“I love the format,’’ said Northern coach David Sukup. “I’m a team coach anyway. I coach football, I coach swimming, I coach baseball. I like the team format. It’s better. It’s better for kids. Everybody is involved. You get to sit and watch all of your kids in the finals. We see all eight flights.’’

Clearly the most entertaining match was at No. 1 singles where the effervescent Nathaniel Webster of Mattawan took on Northern’s Peter Renucci.

Distributing enough energy for himself and his teammates, Webster’s enthusiasm was infectious as he yelled and screamed throughout the match, encouraging his teammates in the process. His 6-2, 6-1 victory was one of the few bright spots for Mattawan.

The reigning champs were unfazed by the rain and cold, which forced part of the semifinal flight indoors. 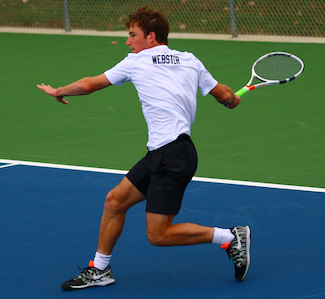 Owen Goodrich got the first points for Northern at No. 4 singles, beating Andrews Williams 6-1, 6-0. Moments later Northern was up 2-0 after the No. 3 doubles team of Drew McKenzie and Luke Zhu prevailed, 6-4, 6-0.

“I was glad we didn’t play outdoors,’’ said Goodrich. “It’s nice and warm and comfortable inside. The thing about this format is I’m out there trying to win and I’m looking over at each side cheering my teammates on. This is definitely a team format.’’

Northern’s Ryan Lee won the No. 3 singles match, 1-6, 6-2, 6-0 while teammate Sid Varma won at No. 2 in three sets after also dropping the first. Justin Lee and Cole Rynbrandt at No. 1 doubles and Ryan Stewart and Anderson Halland at No. 4 both won in straight sets.

Just before the final was about to start outdoors, ominous weather appeared and the rest of the tournament was moved inside.

“Outdoors, indoors, outdoors … it’s a different way to try to win the title,’’ said Sukup. “We won the title last year. We’re glad we’re in the finals with a different format. Long day.”

“It has been a really tough journey to get here, but I feel like my guys are playing their best tennis and they’re ready to go,” he said.

“I absolutely love the format. In years past you’ll have a couple of flights remaining and everyone is kind of sitting around waiting. With this format you truly figure out who is the best team. That’s the nature of the MHSAA; find the best team and find the best player. I feel like this format unequivocally does that.

“I will push for it next year. Right now, I have all 12 of my players on the court trying to determine a championship. I think that’s the way it should be.’’

In the semifinals, Northern faced Birmingham Seaholm and prevailed 6-2, while Forest Hills Central couldn’t advance to face Northern for a third time this season, falling to Mattawan, 5-3.