HOLLY – Grosse Pointe Woods University Liggett went into Saturday’s Finals as the winningest program in Division 4 tennis history despite not having won an MHSAA title in 14 years.

That changed Saturday, as the Knights both ended their long drought and also snapped Ann Arbor Greenhills’ eight-year championship streak by edging the Gryphons at Holly High School.

It was the 35th title overall for Liggett.

Knights coach Mark Sobieralski has a talented core of seven juniors who have been preparing three years for Saturday’s Final.

“These guys came in as freshman two years ago,” he said. “They were good, but they didn’t know how to close out (matches). Last year, we got closer, got more of a taste. We finally beat Greenhills in a dual, and that gave us a lot of confidence.”

The Knights have just two seniors, and got an especially gutty performance from the one at the top of the lineup.

T.J. Dulac, playing at No. 1 singles, competed despite a fractured hamate bone in his right hand. He injured it in the Regional, having to withdraw after a fall while leading 5-0 in his match.

He was cleared to play earlier this week and took the court Friday with his right wrist bandaged.

“It hurt, but it’s all for the team,” said Dulac, who played last year with a broken bone in his left foot. “I worked my backhand more than I’m used to. It worked (Friday) and it almost worked today, so I was happy with how it worked out.”

Dulac got to the semifinals, getting three crucial points for the Knights.

“That really was an incredible, gutsy performance,” Sobieralski said. “It was three points, and it was huge, huge, huge for him to get to the semis when he was hurt. I give him a lot of credit for that.” 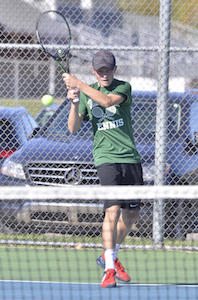 Another stellar performance came at No. 1 doubles, where the Greenhills team of Mitchell Gajar and Jack Harris won the title after being seeded fifth.

It was the second Finals title in a row for both, and their first as a team after competing with different partners last year.

For Eric Gajar, watching his son, Mitchell, win another title was special.

“Tough to describe,” Eric Gajar said. “That was a special moment, (but) I think he would trade that title to keep the team title for his teammates.”

“Our coach told us that if seeds determined how the tournament would go, there would be no need to play,” Harris said. “We worked on the match we were playing in and didn’t look too far ahead.”

“Last year, I lost in three sets,” the junior said. “It was a tough match and I was really upset about that. I was really motivated to win it this year, and I’m really happy with how I played today.”

Saturday marked the fifth time in the last seven years a player from the Capital Area Activities Conference’s White division had won the No. 1 singles crown.

For Dulac, the fall season isn’t over. He will compete for the Liggett cross country team during the final three weeks of the season, something he has done the last couple of autumns after the end of the tennis season.

Only one player on the Liggett roster plays only tennis, and Sobieralski says his players’ multi-sport participation served them well Saturday.

“It makes you tough, mentally tough and strong,” he said. “And they’re competitive. That’s important. I think tennis, a lot of times, is 80 percent mental and 20 percent ability. You win a lot of matches with guts and just hanging in there. I always say a good player can win even when they’re not playing their best, because they’ll try something different and they keep fighting. That’s the team I’ve got. I’m really proud of their fight.”

“My hat’s off to Liggett,” Gajar said. “They’re good players, and they’re going to have most of them back next year, unfortunately for the rest of the state.”