Along with the return to their traditional format after last year’s COVID-driven changes, the tournament featured a new champion, several new competing schools and some brand new names to the Division 2 tennis scene.

For Groves and coach Dave Farmer, the title meant the end of a chase lasting a decade.

“I’ve been coaching here since 2010 and we’ve had several second and third-place finishes,” Farmer said. “This one is very special because it’s the first high school title I’ve ever won. I won three titles at Eastern Michigan University, but this is my first in 12 years of coaching high school tennis.

“We have a veteran team this year, and that is a big reason why we won it. We had great senior leadership and a lot of good juniors as well.”

Groves came into the tournament with nine seniors on the team and seven in the starting lineup. The Falcons were paced by their singles lineup but received big efforts from doubles down the stretch.

“We have a good group of singles players that carried us for the bulk of the year,” Farmer said. “Our doubles teams really picked it up in the tournament and really helped solidify the team.”

The Falcons also had a talented freshman in the singles lineup, and he made his high school Finals debut in a big way. Groves freshman Michael Liss won the No. 3 singles title as he defeated Will Seymour of Detroit U-D Jesuit 6-4, 6-3.

“It feels absolutely amazing,” Liss said. “I just tried to stay calm and not get upset at anything at all. I feel that as a team we were a cohesive unit, and we all pushed each other to get better. I’m just a freshman, but I know we’ve been really close to winning it as a team. We’ve finished second and third a lot so we really wanted to win it this year.”

Liss was not the only freshman to win an individual flight championship. Okemos freshman Suchir Nagisetty arrived on the Finals stage in a big way as well as he defeated Andrew Williams of Mattawan 7-5, 6-1, to clinch at No. 4 singles.

The win was especially meaningful for Nagisetty as he followed in the footsteps of his older brother Sid who won an individual flight title during his freshman season at Okemos in 2017. Sid was in attendance cheering and supporting his brother and has played his own role in Suchir’s development as a player. 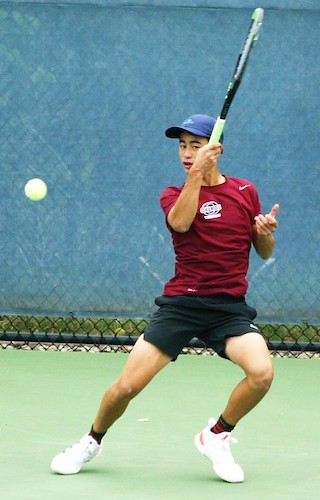 “My brother coached me and trained me this summer,” Suchir said. “I wanted to follow in his footsteps and win a state title in my freshman year. It is something I’ve thought about for a long time. There is some pressure, but once you start playing the match your love of tennis takes over and you just concentrate on playing the game. Winning the title feels great, and it’s nice to have something in common I can share with my brother.”

A new name to Division 2 tennis but a familiar face on the state scene, Okemos sophomore Ethan Portnoy, came away with the No. 1 singles championship. Portnoy, who played doubles last season, moved up to No. 1 singles and defeated Connor Stafford of Grosse Pointe South 6-3, 6-4.

Like Nagisetty, Portnoy had a good example of what it takes to win an individual championship under his own roof as his older brother Josh Portnoy was a two-time Finals flight champion during his high school career at Okemos.

“It’s really cool to follow in my older brother’s footsteps,” Portnoy said. “I had a lot of confidence that I could do it. I played a lot of USTA (United States Tennis Association) tournaments in the summer and had a lot of tough matches, and I knew I could bring that experience to high school tennis.”

At No. 2 singles, senior Owen Goodrich of Forest Hills Northern wrapped up his career in a memorable way by outlasting Okemos senior George Fan in a grueling, three-set struggle 6-2, 3-6, 6-4.

“I just took it one point at a time,” Goodrich said. “I’ve played him before, and I knew it was going to be a tough match. I knew he’s a great player, but he’s not invincible.”

Winning his final match as a senior was a fitting way to go out for Goodrich, who lost in the final at No. 4 singles as a freshman.

Grosse Pointe South, in Division 2 for the first time after having played in Division 1 for years, finished in a tie for sixth place and was led by seniors Blake Discher and Alex Prather. Discher and Prather teamed up to stop Thomas Ladwein and Aaron Li of Midland Dow 6-4, 6-3, at No. 1 doubles.

“We played really good,” Prather said. “It was one of our best days ever. This is the second year that we’ve played as partners, and we do a great job of supporting each other.”

The duo was determined to bring home a title for South, and even though they believed they could win, there was an element of awe when it was over.

“I thought we could take it with how much we put into it,” Discher said, “but in the end we were kind of shocked that we actually did it.”

The Jesuit No. 4 doubles team of Sam Owens and Stephen Cibulas won a tough struggle against Andrew Weitzman and Gabe Klein of Groves 7-5, 7-6 (2). The win was made even harder considering the duo had just spent plenty of energy getting past a tough Forest Hills Northern team in the semifinal round.

“We had a real tough match with Forest Hills Northern, and it drained a lot of our energy,” Owens said. “We had to be more mentally tough in this match. They were up 4-1 in the second half so we had to come back to win it.”

“We just played with more energy,” Cibulas added. “It was all about the energy. We also support each other really well.”

At No. 2 doubles, the Forest Hills Northern duo of Aaryan Singh and Anderson Halland were pushed to the limit before claiming a 3-6, 6-1, 6-3, victory against Dylan Wolf and Alexandras Abarius of Groves.

Birmingham Seaholm, which tied for sixth with Grosse Pointe South, was paced by its No. 3 doubles team of Alex George and Alex Lewis. The Seaholm duo won the No. 3 doubles title by stopping Kyle Wang and Joey Lamberg of Forest Hills Northern 6-3, 6-3.

PHOTOS (Top) Birmingham Groves' Michael Liss returns a volley Saturday during his run to the No. 3 singles championship. (Middle) Okemos' Ethan Portnoy drives a shot during a No. 1 singles match. (Click for more from High School Sports Scene.)