ZEELAND — Everyone else was chasing Joshuwa Hollomon on Saturday as he was chasing his place in MHSAA track and field history.

Hollomon became only the 10th Lower Peninsula boy in the 91-year history of the Finals to win the 100-meter (or 100-yard) dash three times in his career, finishing the feat at the Division 2 meet at Zeeland Stadium.

Hollomon won the LP Division 1 title as a sophomore in 2013 before taking Division 2 his final two years.

"To win it three years, going unbeaten, I can look back and tell that to my kids one day and say, 'I did this' and have that be an influence on them," Hollomon said. "This is a great accomplishment."

Hollomon also was trying to sweep the 100 and 200 in the Finals for the second straight season, but Fife turned the tables in the 200 to win in 21.55 seconds. Hollomon settled for second in 21.98.

Going into the meet, Hollomon had no idea of what to expect from Fife.

"I don't know anybody I race," said Hollomon, who will play football at the University of Cincinnati. "I don't watch them. I study myself. I know the person next to me on both sides wants to win just as bad as I do. When you get fast people, it makes you faster."

The biggest disappointment for Hollomon came in the 800 relay, as he never received the baton for the final leg because of a dropped first exchange.

While Hollomon has become accustomed to winning MHSAA championships, a school with a championship pedigree in nearly every sport except track and field won its first title. 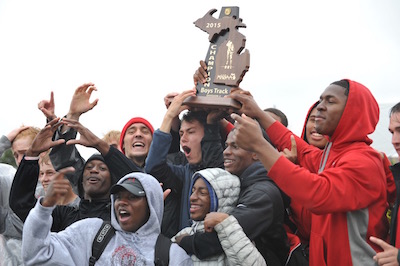 The Eaglets' best finish in an MHSAA final meet was third in Division 2 in 2006. They laid the groundwork for Saturday's championship by placing fourth last year.

"We broke six school records this year," St. Mary's coach Sean Clouse said. "We're pretty young still. We have a great group of seniors and a lot of young kids, too, so hopefully we'll be back again next year."

Six of the 14 athletes who scored for the Eaglets were sophomores, including 300-meter hurdle champion Richard Bowens. Bowens posted a time of 38.42 seconds and was also on the seventh-place 1,600 relay team.

St. Mary's won the 400 and 800 relays for the second year in a row, but was able to take the team title by having more firepower throughout its lineup. The Eaglets scored in eight events, including all four relays.

Senior Ross Moore was on both winning relay teams and placed eighth in the long jump. Sophomore Kahlee Hamler was also on both first-place relay teams. Freshman Ky'Ren Cunningham was on the 800 relay team, while sophomore Ryan Johnson rounded out the 400 relay.

Sophomore Trey Bryan was fifth in the long jump, while senior Brian Agomuoh was seventh in the discus.

"Our long jumper surprised us a little bit," Clouse said. "We knew our relay teams were going to do well. We're just so happy with them. The sprint teams doubled up last year and doubled up again this year. Cochran in the 400 came through really big. The hurdler, Bowen, was amazing."

Cool, rainy conditions favored distance runners, but were a detriment to other athletes. Algonac senior Mitchell Mueller was able to repeat as pole vault champion by going 15 feet, 6 inches, but was left wondering what might have been under more ideal conditions. He attempted to break the LP Division 2 Final record of 16-1 set by Marine City's Jaime Salisbury in 2012, but came up short in three tries at 16-2.

"It was definitely challenging," Mueller said. "It kind of stunk that today had to be that kind of day, but I still got to go 15-6, still got a chance to go for the record. By the time we got to the chance to go for the record, it was raining pretty good. The last attempt was pretty close. It was just too much rain, not a good day. It was really cold, but it was still fun and I still had a great time."

Algonac had another champion in junior Morgan Beadlescomb, who won the 1,600 in 4:13.58. He sat on the shoulder of Cedar Springs senior Austin Sargent most of the race before making an explosive move with 300 meters to go. It was a flashback to a similar scenario in the cross country finals in November, when Beadlescomb out-dueled Sargent for the title.

"I work on my kick a lot," Beadlescomb said. "I kind of rely on that. In cross country, it was exactly the same. The last 300 meters is when I took off and won."

The host Zeeland school district had three of the top four finishers in the 800, with senior Sam Plaska of Zeeland West making his move with 100 meters remaining to overtake Sturgis junior Daniel Steele, who had opened up a large lead. Plaska won in 1:55.11, just ahead of Zeeland East's Matt Cramer. East's John Groendyke was fourth in 1:56.83.

"It's unbelievable," Plaska said. "I'm so happy to have the home crowd here, my family and friends cheering me on. It's such a great day."

Zeeland East provided some excitement for the home crowd early by setting the LP Division 2 Final record in the 3,200 relay. The quartet of Scott Binder, Dan Cramer, Matt Cramer and Groendyke won in 7:50.70, breaking Fenton's mark from 2007.

Williamston won the 1,600 relay in 3:22.98 with the team of Hunter Grischke, Seth Kerby, Steffan Smalley and Tyler Lamar.